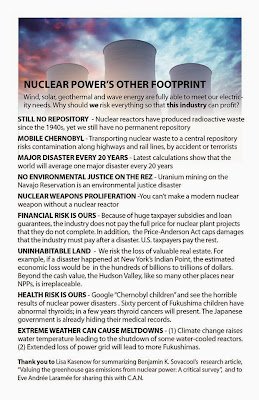 Wind, solar, geothermal and wave energy are fully able to meet our electricity needs. Why should we risk everything so that this industry can profit?

STILL NO REPOSITORY - Nuclear reactors have produced radioactive waste since the 1940s, yet we still have no permanent repository

MOBILE CHERNOBYL - Transporting nuclear waste to a central repository risks contamination along highways and rail lines, by accident or terrorists

FINANCIAL RISK IS OURS - Because of huge taxpayer subsidies and loan guarantees, the industry does not pay the full price for nuclear plant projects that they do not complete. In addition, the Price-Anderson Act caps damages that the industry must pay after a disaster. U.S. taxpayers pay the rest.

UNINHABITABLE LAND - We risk the loss of valuable real estate. For example, if a disaster happened at New York’s Indian Point, the estimated economic loss would be in the hundreds of billions to trillions of dollars. Beyond the cash value, the Hudson Valley, like so many other places near NPPs, is irreplaceable.

HEALTH RISK IS OURS - Google “Chernobyl children” and see the horrible results of nuclear power disasters . Sixty percent of Fukushima children have abnormal thyroids; in a few years thyroid cancers will present. The Japanese government is already hiding their medical records.

EXTREME WEATHER CAN CAUSE MELTDOWNS - (1) Climate change raises water temperature leading to the shutdown of some water-cooled reactors. (2) Extended loss of power grid will lead to more Fukushimas.


via Coalition Against Nukes

thanks to Gail Payne and C.A.N. Coalition Against Nukes

whats up: "Nukes are not carbon-free" | C.A.N. Coalition Against Nukes