Book :: "YES, I GLOW IN THE DARK! One Mile from Three Mile Island to Fukushima and Nuclear Hotseat" by Libbe HaLevy 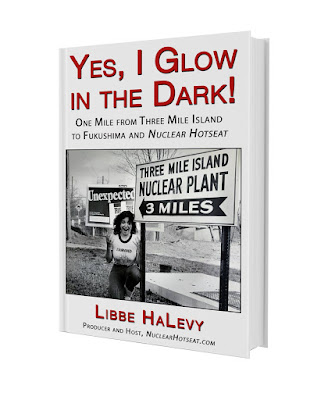 Libbe HaLevy's new book, "YES, I GLOW IN THE DARK! One Mile from Three Mile Island to Fukushima and Nuclear Hotseat," has launched! Please go to Amazon and BUY NOW: https://amzn.to/2wbTNHv

"Absolutely fascinating. This book must be read by all people who care about the future of the planet and their children." - Nobel Peace Prize nominee Dr. Helen Mary Caldicott

It's the story of what happened when I found myself trapped one mile from an out-of-control, radiation-spewing nuclear reactor -- how it impacted life, health, sense of self -- and what it took to recover. A personal memoir, a guidebook on what the nuclear industry gets away with and how they get away with it, and a directory of resources and strategies with which to fight back, the book ranges from 1950's Duck and Cover and Disney’s Our Friend the Atom to how I learned to fight back with facts, sarcasm... and a podcast. 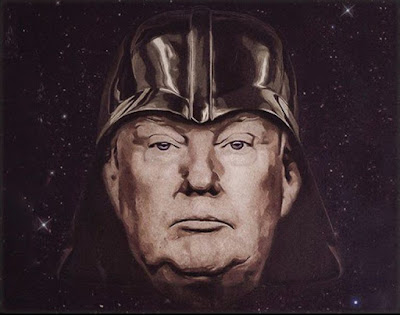 The Trump administration is pushing hard on its scheme to create a Space Force.  Last week Vice President Pence, chairman of a newly reconstituted National Space Council, in a speech at the Pentagon declared: “The time has come to write the next great chapter in the history of our armed forces, to prepare for the next battlefield.”

Pence claimed—falsely: “Our adversaries have transformed space into a warfighting domain already and the United States will not shrink from the challenge.”

Trump, who in June announced he was “directing the Department of Defense and Pentagon to immediately begin the process necessary to establish a Space Force as the sixth branch of the armed forces,” following Pence’s address Thursday promptly tweeted: “Space Force all the way!”

At the same time, signaling that the Space Force drive will be used politically, the Trump campaign organization sent out an email asking supporters to choose between six Space Force logos that were depicted. “President Trump wants a Space Force—a groundbreaking endeavor for the future of America and the final frontier,” wrote Brad Parscale, campaign manager of “Donald J. Trump for President, 2020.” “To celebrate President Trump’s huge announcement, our campaign will be selling a new line of gear.” He asked backers pick “your favorite logo.”

“This is a crucial moment where the public must stand and say ‘hell no!” said Bruce Gagnon, coordinator of the Global Network Against Weapons & Nuclear Power in Space, on his blog. “Star Wars” isn’t “affordable, is an insane idea, and would very likely lead to WW III—the final war,” said Gagnon…


see also: Militarizing Space: Starship Troopers, Same As It Ever Was | Counterpunch

The Hiroshima anniversary: 5 things you should know about nuclear weapons today | Vox 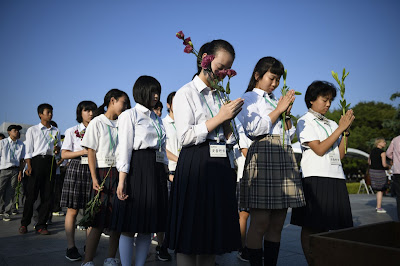 Seventy-three years after the first use of the atomic bomb in wartime, commitment to arms control is fading.


…This anniversary arrives at a time when the “nuclear enterprise” in the United States is gearing up to spend more than $1 trillion on new missiles, bombers, and submarines over the next three decades.

Meanwhile, the competing “arms control enterprise” is unraveling: There are at present no negotiations underway to reduce US and Russian nuclear forces, while China, Pakistan, India, and North Korea are increasing theirs. Yet at the same time, the situation isn’t completely bleak. Here are five key points to keep in mind about nuclear weapons on this somber anniversary…

The Hiroshima anniversary: 5 things you should know about nuclear weapons today - Vox