(visit the page for videos)

Numnutz of the Week (for Outstanding Nuclear Boneheadedness):
Do you actually need any other explanation of why transporting highly radioactive nuclear reactor waste over the roads is not a good idea?  (HINT:  No other transport method is much better.) 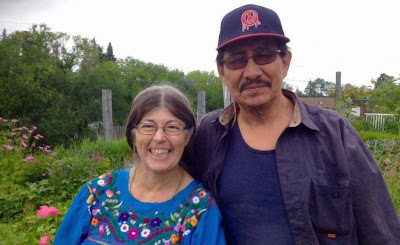 When the first uranium mines opened on his grandfather’s trapline, elders tasked Marius with keeping watch on these companies that make “big bullets” (nuclear bombs). Youth tasked Candyce to protect their futures from nuclear waste burial. Along with other concerned people, they formed the Committee for Future Generations, to raise awareness throughout Saskatchewan and network globally.

What are the most significant issues?

Dene traditional knowledge is that the “black rock,” should stay underground — on pain of unleashing “demons” — and kept in its place by “Thunder Beings,” its continuously burning “sacred fire” acknowledged as a deity and never touched.

After the uranium mines opened, the incidence of previously uncommon cancers and other rare diseases started to rise. Most people who worked in the mines suffered and died young of cancers. Physicians noting increases in diseases like lupus began asking for a baseline health study. That’s never been done. Cancer rates are at least one in seven people.

Studies on moose, caribou, fish and berries show these dangerous substances in foods people depend on. In communities around Lake Athabasca, where tailings from mines that fuelled Cold War nuclear weapons continue blowing and flowing into the lake, there are “limit fish intake” warnings on the docks. This may help limit the impact of heavy metals but doesn’t stop damage from ingested radionuclides. The World Health Organization admitted that even low doses of radiation exposure can lead to increase cancer risk.

Industry sets its own “as low as reasonably achievable” limits. Since the Fukushima meltdowns, many countries raised acceptable safety limits to accommodate additional global exposures.

When a physician asked for a baseline study at the October, 2012 Canadian Nuclear Safety Commission hearings for the relicensing of Rabbit Lake and McArthur River mines and the Key Lake uranium mill, the CNSC consulted Dr. James Irvine, northern medical health officer. He asked for a wellness study. It was funded with uranium mining companies Cameco and AREVA.

The Northern Health authority’s close relationship with the uranium mining companies — the Community Vitality Monitoring Partnership — is decades-long. Cameco funds a lot of community health care. It makes them look like good corporate citizens while masking the effects of the non-stop radionuclides and heavy metals they release into the environment…

more: People just like you are defending us all against a toxic future - David Suzuki Foundation


It was an honor to stand in the House yesterday... - Georgina Jolibois, MP Desnethé-Missinippi-Churchill River

It was an honor to stand in the House yesterday to commend the work of the Committee for Future Generations, which has succeeded in keeping nuclear waste out of all communities of northern Saskatchewan.

Uranium Miners Pushed Hard for a Comeback. They Got Their Wish.

MONUMENT VALLEY, Utah — Garry Holiday grew up among the abandoned mines that dot the Navajo Nation’s red landscape, remnants of a time when uranium helped cement America’s status as a nuclear superpower and fueled its nuclear energy program.

It left a toxic legacy. All but a few of the 500 abandoned mines still await cleanup. Mining tainted the local groundwater. Mr. Holiday’s father succumbed to respiratory disease after years of hacking the ore from the earth. 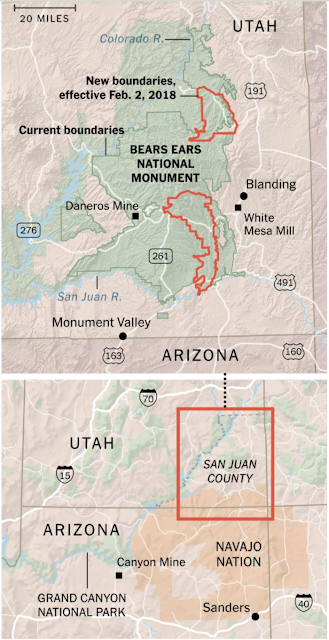 But now, emboldened by the Trump administration’s embrace of corporate interests, the uranium mining industry is renewing a push into the areas adjacent to Mr. Holiday’s Navajo Nation home: the Grand Canyon watershed to the west, where a new uranium mine is preparing to open, and the Bears Ears National Monument to the north.

The Trump administration is set to shrink Bears Ears by 85 percent next month, potentially opening more than a million acres to mining, drilling and other industrial activity. But even as Interior Secretary Ryan Zinke declared last month that “there is no mine within Bears Ears,” there were more than 300 uranium mining claims inside the monument, according to data from Utah’s Bureau of Land Management office that was reviewed by The New York Times.

more: Uranium Miners Pushed Hard for a Comeback. They Got Their Wish. - The New York Times

…PG&E will, however, be able to shift onto its customers $241.2 million in costs related to shutting down the plant, including retaining its staff. PG&E estimated Thursday that customer bills would rise less than 0.5 percent on an annual basis as a result of the commission’s decision…

… “The decision undermines what should have been an inspiring model for the rest of the country and the world on best practices for planning for the closure of giant, expensive, and inflexible nuclear plants,” said Ralph Cavanagh, co-director of the energy program at the Natural Resources Defense Council, one of the groups that negotiated the closure agreement with PG&E.

The commission, he said, did not seem to appreciate the amount of thought the negotiating partners, some of which had a long history of fighting PG&E, put into the details of their agreement.

“It was a joint proposal by numerous parties that have never agreed on anything,” Cavanagh said… 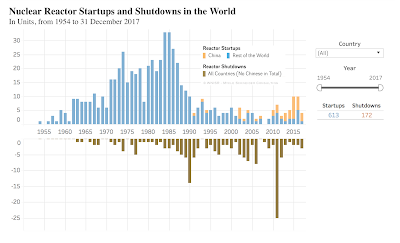 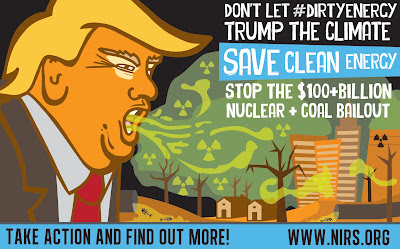 – Department of Energy (DOE) Secretary, Rick Perry, has proposed an unprecedented bailout for nuclear and coal power plants that will raise people’s energy bills and undermine renewable energy.
The Federal Energy Regulatory Commission (FERC) is fast-tracking the DOE’s radical proposal and plan to adopt it in 60 days. Public comments were due October 23rd, exactly three weeks after the plan was announced, and we delivered over 11, 420 comments to FERC.
The proposal calls for subsidies for old, outdated, and very polluting nuclear and coal plants under the guise that they promote electric grid reliability.
FERC is taking a final round of public comments until November 7. And we need to deliver thousands more comments to them! Even if you already signed a petition or sent a comment, please do so again for this final round.
It is still important to voice our opposition and the time to act is NOW! And after that, pass it on to your friends and to your contacts on facebook, twitter, Instagram, etc.
Stay tuned for more actions to take as we build this campaign to save our 100% Clean Energy Future!