Switzerland has long met a good portion of its energy needs by using nuclear power. But in the wake of the accident at Fukushima, the country will have to turn elsewhere—while still remaining true to its history of self-sufficiency and energy independence. This effort is made more complicated by fears that one of its traditional energy sources, hydropower, may no longer be as reliable as in the past. But with a combination of energy conservation, greater efficiencies, alternative energy sources, the “smart grid,” and the introduction of new technologies currently on the drawing board, the country may readily be able to replace the energy lost by the closing of its existing nuclear power plants. And the loss of the snowpack and glaciers (due to climate change) may not be as dire for Switzerland’s hydropower as first anticipated... 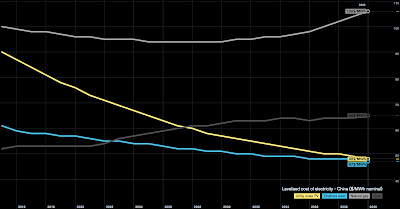 This trend is clear: Solar and wind are already cheaper than coal and will become more so; and will beat out natural gas as well. Nuclear is so expensive it’s off the chart. Chart from Bloomberg New Energy Finance. 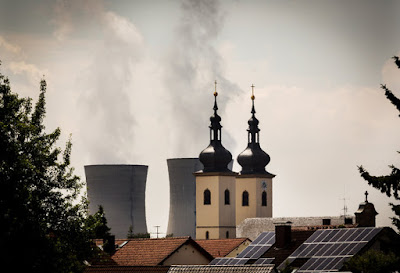 12 July 2015: GRAFENRHEINFELD, Germany — In one of this country’s most popular novels for young readers, the nuclear reactor on the edge of this Bavarian town melts down, spewing a radioactive cloud that threatens all of Germany and robs a 14-year-old girl of her family and her hope for the future.

Last month, that nuclear power plant in Grafenrheinfeld, responsible for meeting the energy needs of industry-heavy Bavaria since 1981, came to a less dramatic but equally symbolic end. The plant became the first active reactor to be decommissioned since 2011, following Chancellor Angela Merkel’s about-face on nuclear power after the Fukushima Daiichi nuclear plant catastrophe in Japan...

...progress has been made across Germany. Renewable energy sources accounted for 26 percent of its gross electricity production last year, double the 13 percent of the United States but lagging neighboring Denmark, which is generating more than 30 percent of its electricity through wind power alone...

URGENT! We, the undersigned, strongly urge you to exercise the power of your office to ensure that the Federal Energy Regulatory Commission (FERC) rescind its approval of the Spectra Algonquin Incremental Market (AIM) pipeline expansion project. You must stand with your constituents and local, county and state elected officials to stop the project immediately!

Treatments of the Fukushima disaster might now come to include what Pope Francis calls “the new paradigms and forms of power derived from technology” in his new encyclical, Laudato Si. Such “powers” contribute to the propagation of different forms of pollution whose effects are global. This includes all that yet emanates out of the Fukushima aftermath.
Francis states, “Technology, which linked to business interests, is presented as the only way of solving [pollution] problems, in fact proves incapable of seeing the mysterious network of relationships between things and so sometimes solves one problem only to create others.” Pritchard makes a corroborating observation: During mitigation at Fukushima, many problems were created in the process of engendering solutions to the onset of a “cascade of accumulating problems.” For instance, consider the employment of Pacific seawater and its exacerbation issues of pressure, cooling, and pollution.
Along with pollution, Francis invokes the inseparable bond “between concern for nature, justice for the poor, commitment to society, and inner peace.” Be it climate change or some other human-abetted disaster, Francis is right to conclude that there are “grave implications” for the “environmental, social, economic, political, and for the distribution of goods.” He is also right to assert that the “worst impact will probably be felt by developing countries,” where many of the world’s poor live, and whose subsistence depends chiefly on “natural reserves and economic systemic services such as agriculture, fishing and forestry”—because they lack “other financial activities or resources which can enable them to adapt to climate change or to face natural disasters…”
To be sure, what Francis calls “access to social services protection” is something not only limited for the poor (despite whatever benefits they may receive from nuclear energy), but also, it is a luxury that remains well beyond their reach.
Francis’ commentary is relevant wherever economic and political interest threaten ecology and oppress the poor. Hell, the two often go together! For example, consider the Act on the Promotion of Energy Development, which passed under Japan’s Kakuei Tanaka in 1974. The act enabled Japanese towns and villages that housed nuclear power plants to receive ample subsidy remunerations. The impoverished rural local governments were seduced; they opened up to receive the construction of nuclear power plants despite a lack of debate about nuclear power safety.
This, writes Miyadai, marks the beginning of the poor’s “life with nuclear power plants” in Japan... 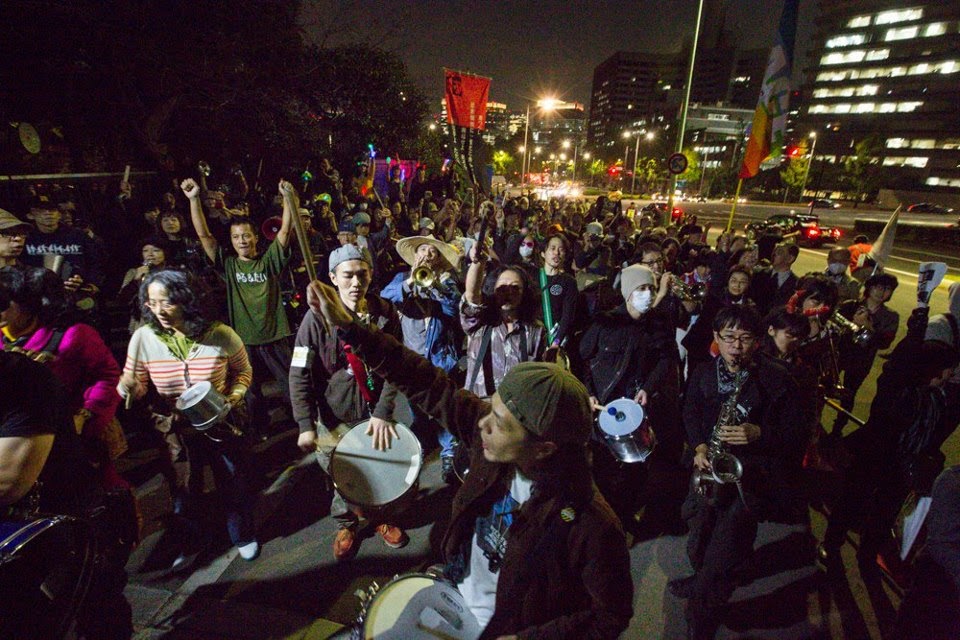 Too cheap to meter? Not nuclear–solar! | GreenWorld


The nuclear power industry certainly rues the day the concept that atomic electricity would be “too cheap to meter” entered the public’s mind. The phrase has become inextricably linked with nuclear power, but not in the way its creators envisioned: instead of as a success story, it has become a symbol of nuclear power’s economic failure.
“Too cheap to meter” too quickly became “too expensive to use” and “too costly to build.”
So the headline above is offered with some trepidation and a grain of salt; over-promising on solar power will prove no more beneficial than it was for nuclear.
Still, the comparison is obvious. As giant nuclear utilities seek new ways to game the system and bleed ratepayers for every penny they can–whether or not those ratepayers have any anything left to bleed–to prop up reactors that produce electricity normal people simply can’t afford and shouldn’t have to pay for, the cost of solar power just keeps falling and falling.
Today’s case in point: the city of Austin, Texas recently put out bids for 600 Megawatts of new solar power. They received bids for nearly 8,000 MW–a clear indication that we have barely begun to touch the capability of solar to power our nation. Of those bids, nearly 1300 MW, or double what Austin intends to buy, came in under 4 cents per kilowatt/hour...

more: Too cheap to meter? Not nuclear–solar! | GreenWorld 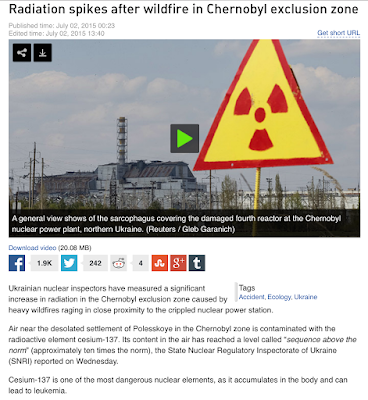 Ukrainian nuclear inspectors have measured a significant increase in radiation in the Chernobyl exclusion zone caused by heavy wildfires raging in close proximity to the crippled nuclear power station.
Air near the desolated settlement of Polesskoye in the Chernobyl zone is contaminated with the radioactive element cesium-137. Its content in the air has reached a level called “sequence above the norm” (approximately ten times the norm), the State Nuclear Regulatory Inspectorate of Ukraine (SNRI) reported on Wednesday.
Cesium-137 is one of the most dangerous nuclear elements, as it accumulates in the body and can lead to leukemia...