Thousands rallied outside the prime minister’s office in Tokyo’s Nagatacho district to protest the government's decision to restart two reactors at the Oi nuclear power plant in Fukui Prefecture.
The No. 3 and No. 4 reactors, operated by Kansai Electric Power Co., had been shut down for regular maintenance inspections. The No. 3 reactor is due to go back online on July 1.
Similar protest rallies were held across the country, including Osaka, which is served by Kansai Electric.
Many people joined the rally in Tokyo on June 29 in response to calls on Twitter. Holding banners and placards, the crowd filled the sidewalk on the way to the prime minister’s office.
Organizers said the crowd numbered 150,000 to 180,000, but Tokyo police estimated it at 17,000 strong.
“Make an honorable withdrawal from nuclear power generation,” one protester shouted...
...“The government never cares about our lives,” she said. “I have been a silent observer so far, but I cannot stand aside any longer.”
In Osaka, an estimated 2,200 protesters gathered in front of Kansai Electric’s head office in Kita Ward, according to organizers.
Citizens’ rallies against the reactor restarts were also held in Nagoya, Nagasaki, Kumamoto and elsewhere... more

- Common Dreams staff
According to documents revealed by the Southern Alliance for Clean Energy (SACE), the US Department of Energy (DOE) handed a secret 'sweetheart deal' to Southern Company, a large utility company. The deal includes loan guarantees for two new nuclear reactors proposed for Plant Vogtle in Georgia.
SACE won a two-year legal battle to secure documents from the DOE under the Freedom of Information Act. The documents show the DOE is willing to charge Southern Company a credit subsidy fee at a major discount compared to average rates, at the expense of Georgia taxpayers, according to Inter Press Service.
“There’s a look (among the documents) that shows the utilities were involved in the negotiations. This is taxpayer dollars, (but) taxpayers were not privy to these negotiations,” stated Sara Barczak, program director for SACE’s High Risk Energy Choices program. “Taxpayers would never have learned of this sweetheart deal and how Southern Company seems to have had a hand in the agreement,” she said.
“I’m not going to comment specifically on the rate,” Steve Higgenbottom, a spokesman for Southern Company, told IPS.
The utility company has not yet officially accepted the loan guarantees.
If the reactors come online in the coming years, they will be the first new reactors in the US in decades. 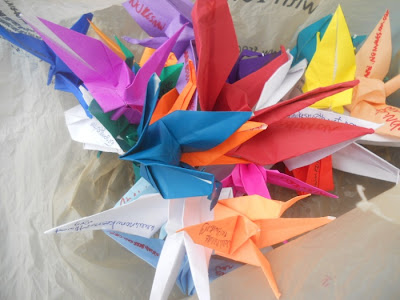 “Going to the Melt Down was a pretty intense experience, I think. When I went with my mom to deliver the letter to the Prime Minister office, wow, that was scary! 27 floors up I came up and I was just dizzy haha, not sure of what we were expecting, but it all turned out fine. I wore a gas mask later for the die-in and that was really strange! People kept staring like umm… okee then… and it was like YEAH. PAY ATTENTION. STUFF IS HAPPENING HERE!

We made all these different cranes that my sister and I dropped on the “dead” people and then finally we died, which was pretty intense. If I had to live in one of those gas masks that would be…. impossible. Not only was it difficult to breathe, it was difficult to see, and at one point I had to cover up one of the holes in the end of my mask to get enough oxygen. When I went to give the origami birds to the two security guards (who didn’t take them, so the cranes were left on the steps) I had the mask on wrong and couldn’t breathe at all. Frightening thought. What if we had to really use those and yours was malfunctioning when you were outside? what then? ”
Willow Rakoncay, 13 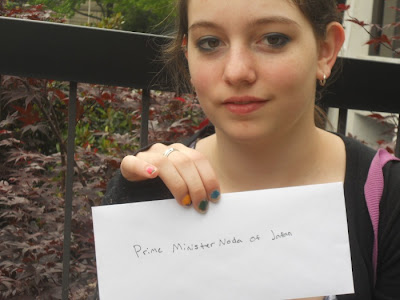 Beth, outside the Consulate of Japan,
hand-delivering a letter protesting the restart of the Ohi reactor

Email ThisBlogThis!Share to TwitterShare to FacebookShare to Pinterest
Labels: action

Current NIRS Actions!
Important things you can do to help build a nuclear-free, carbon-free energy future.

Join 36 organizations (and growing)--more than 1 million Americans--and support the American Clean Energy Agenda to build a renewable energy reality by 2030.

The single most important action you can take to help stop new nuclear power in the U.S. Act here now: tell DOE Secretary Chu and President Obama to stop a taxpayer loan for new reactors in Georgia.


Tell the EPA: Don't Sacrifice Navajo Water for Uranium Mining!(change.org petition from our friends at ENDAUM).

Three Mile Island, Chernobyl, Fukushima Daiichi: What is the Link? on Vimeo

CCTV's Margaret Harrington hosts Maggie and Arnie Gundersen of Fairewinds Energy Education. Arnie and Maggie discuss their recent travels to Italy to take part in and to view an opera on the Three Mile Island nuclear power plant accident, entitled "La cortina di fumo" ("the smoke curtain"). Arnie and Nobel Peace Laureate Dr. Shirin Ebadi first participated in a symposium about the "Smoke Curtain" regarding the governmental smoke curtain that covers the truth about nuclear power accidents. Ms. Harrington and the Gundersens discuss the impact of the Three Mile Island, Chernobyl, and Fukushima Daiichi disasters on the environment and people's health.
Three Mile Island, Chernobyl, Fukushima Daiichi: What is the Link?
Fairewinds Energy Education
Posted by rc at 10:20 PM No comments:

US Invests in SMR Technology > Emerging Technologies Library from TechCast

> US Invests in SMR Technology > Emerging Technologies Library from TechCast