Finland and Poland to co-operate in renewable energy investments

Sweden heads towards renewable energy, and away from nuclear

Radioactive wastes with a half life of 704 million years, for Nevada

USA government push for nuclear energy has ended in failure

281_AntiNuke’s anger at authority is at a critical mass

Monju fast-breeder reactor will not restart in 2013

Email ThisBlogThis!Share to TwitterShare to FacebookShare to Pinterest
Labels: newsreel 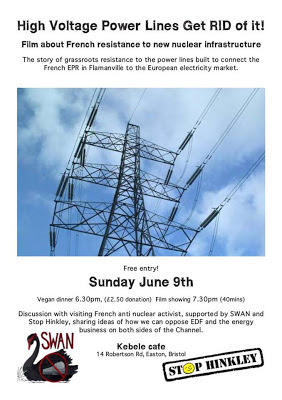 See the Film. meet the activists,

The film gives a story of grass root resistance to the power lines built to connect the French EPR (new nuclear build in France) in Flamanville to the European electricity market.

NUCLEAR POWER and the construction of Hinkley C

All welcome, actors and non-actors (experience not essential) for a fun
and stimulating afternoon.


We will have a small gathering with a Japanese Activist Yumi Kikuchi who is visiting the Bay from Hawai’i. She evacuated from Chiba, Japan after the ongoing Fukushima nuclear accident, and will present her project to evacuate Fukushima children during summer to Hawai’i.
TIme: May 31st, 2013 5PM – 8PM
Place: 1271 Hearst Ave, Berkeley at Fusako DeAngelis’s. It’s 5 block walk from North Berkeley BART station.
$: $5 for snacks and tea
311以降、千葉から避難し、現在ハワイに在住のジャーナリスト、きくちゆみさんがバークレーを訪れます。食事をしながら、夏休みの間、福島の子ども達をハワイへ避難させるプロジェクトなどについても、お話を伺います。
お誘いの上、ご参加ください。
日時  ： ５月３１日（金曜日）５時から８時まで
When    Friday May 31, 5-8PM
場所  ： １２７１ Hearst Avenue Berkeley ,デイアンジェルスふさこ宅
Place    North Berkeley BART駅より歩いて３分
(4-5 blocks from North Berkeley BART station)
会費  ： ５ドル（軽い食べ物を用意致します）
Fee $5 for food and tea

• whats up: The Fukushima Daiichi disaster: Ongoing lessons for California (#SanOnofre) | FOE  - Friends of the Earth press release and video of Kendra Ulrich at the event

Concerned citizens of Southern California are honored to announce that the former Prime Minister of Japan, Naoto Kan, will visit the region June 3-5 to share his perspectives on nuclear safety and the future of nuclear power.

Kan was prime minister in March 2011 when an earthquake and tsunami triggered the catastrophe at the Fukushima-daiichi nuclear plant. He was confronted by three reactor meltdowns and a nuclear crisis that persists to this day.

On Tuesday, June 4, Kan will speak in San Diego at a seminar, The Fukushima-daiichi Nuclear Accident: Lessons for California, starting at 9 a.m. in the chambers of the San Diego County Supervisors, 1600 Pacific Highway. He will be joined by former U.S. Nuclear Regulatory Commission Chair Gregory Jackzo, who led the commission during the Fukushima-daiichi accident.

On 11 June 2012, a large number of people from Fukushima formed a united front as Fukushima Nuclear Disaster Plaintiffs and collectively filed a case against 33 people for the immense damage resulting from the nuclear disaster at the Fukushima Daiichi Nuclear Power Plant. The accused are executives from the Tokyo Electric Power Company (TEPCO), the Nuclear Safety Commission, the Nuclear and Industrial Safety Agency, officials from the Ministry of Education, Culture, Sports, Science and Technology (MEXT), academics, and the Radiation Risk and Health Management Advisors for Fukushima Prefecture. http://www.save-children-from-radiation.org/news/legal-actions/

As reported in recent Asahi Shinbun and Japan Times articles, the Japan High Court has REJECTED the plaintiff's demand to evacuate Fukushima children, even while admitting that the children were being exposed to radiation levels above the government total annual threshold of 1 millisievert/year:http://www.commondreams.org/headline/2013/05/26

In Japanese, "The Women of Fukushima" explain the plight of farmers unable to farm, of their fight to evacuate the children and of the negligence of the Japanese government. This video was produced a year after the disaster began. Yet nothing has changed. http://vimeo.com/52808567

Finally, over 40% of children tested in Fukushima for thyroid irregularities, have tested positive. Ian Thomas Ash, a documentary film maker living in Tokyo, has directed "A2", a movie about these thyroid examinations. His film was submitted as evidence for the ongoing Fukushima Evacuation Trials. See the trailer for "A2", with English subtitles:http://www.a2documentary.com/

In summation, now that UN Special Reporteur Anand Grover's report on Fukushima is out: http://www.ohchr.org/Documents/HRBodies/HRCouncil/RegularSession/Session23/A-HRC-23-41-Add3_en.pdf , many activists and citizens of the world are acutely aware of the ongoing atrocities being inflicted upon the Japanese people inside and outside Fukushima. And yet, the voice of Japanese citizens protesting the government's negligence of the children in Fukushima, protesting nuclear restart, protesting the burning of radioactive debris.... is being silenced. Furthermore, the international community's cry for bringing these issues to justice is being ignored by the political establishment in Tokyo.

We have a once-in-a-lifetime chance to bring the issue of Fukushima and nuclear power to the Japanese people at large and by extension, to the world. Southern California will host "Fukushima Ongoing Lessons for Japan and California Summit with Naoto Kan", a meeting of leading world thinkers, scientists and policy makers at The San Diego County Government Center on June 4, 2013. Among those attending: ex-Prime Minister of Japan, Naoto Kan, Arnie Gundersen, chief engineer of energy consulting company Fairewinds Associates and a former nuclear power industry executive, former Nuclear Regulatory Commission (NRC) Chairman Gregory Jaczko, former NRC Commissioner, Peter Bradford (during Three Mile Island Accident), California Lieutenant Governor, Gavin Newsom and many other Mayors and City Council members of Southern California.

Naoto Kan is the only politician who has gone on the record as "anti-nuclear", espousing the horrendous facts of nuclear power gone terribly wrong, as in the case of Fukushima. He has started an "Anti-Nuclear Political Party" in Japan with elections for Parliamentary seats to be held in late July, 2013. He is traveling to California to listen to the people. We have the opportunity to bypass mainstream media inside and outside of Japan by utilizing social media to promote this event, to show the Japanese community that the world supports them. This is a chance for the people of Japan to set Naoto Kan's agenda; in lieu of the present, impotent national government so captured by the nuclear industry, setting Kan's agenda. Even more, this is our opportunity to demand of Naoto Kan to act on behalf of the people, vis a vis Fukushima. More on those demands in the coming days!

In solidarity with Japan,

whats up: Manifesto for Our Children, Our Future by Cathy Iwane

• whats up: The Fukushima Daiichi disaster: Ongoing lessons for California (#SanOnofre) | FOE
- Friends of the Earth press release and video of Kendra Ulrich at the event

a compete collection of videos - the entire seminar in 5 parts:
M1359 < Common < Copswiki

WASHINGTON, D.C. – Under pressure from the California Public Utility Commission, Southern California Edison has released to Friends of the Earth another suppressed and highly incriminating internal document, showing that the utility knew eight years ago of serious flaws in the design of replacement steam generators for the San Onofre Nuclear Generating Station. The letter directly contradicts written testimony Edison gave in January to the U.S. Nuclear Regulatory Commission.
The 2005 letter from then-Edison Vice President Dwight Nunn was released Tuesday, after the state PUC sharply questioned why Edison had not provided it as part of the PUC’s investigation of failure of the San Onofre reactors, shut down since January 2012 after a leak of radioactive steam. The day before, Boxer released a 2004 letter from Nunn proving that Edison knew that the flawed generators were not “like-for-like” with the ones they replaced, but failed to reveal that to the NRC in order to expedite approval from the NRC.

“This new letter shows conclusively that in 2005 Edison was aware that its defective design could lead to vibration and cracking of steam generator tubes,” said Damon Moglen, Friends of the Earth’s climate and energy program director. “While Edison knew this could lead to what the earlier letter calls ‘a disastrous outcome,’ they didn’t fix the problem, they didn’t tell the NRC then and denied it again in testimony this year. This is a scandal of the highest order: Edison prioritized its construction schedule and profits and endangered the lives and livelihoods of millions of Southern Californians.”

In the June 16, 2005 letter, Nunn writes to Mitsubishi Heavy Industries, which manufactured the replacement steam generators to Edison’s specifications, about the “probability” that the design could cause the tubes to vibrate and crack. Despite later suggestions from a joint Mitsubishi/Edison design team to fix the problem prior to construction, the contractors rejected such changes because they would have triggered a lengthy NRC license amendment review, including public hearings. In January, in written testimony to the NRC in a case brought by Friends of the Earth, Edison claimed that the problem “was not known at the time.”

S. David Freeman, former head of the Tennessee Valley Authority and of several nuclear utilities, said Edison knew it was taking a risk.

“With these revelations, it’s clear that Edison was conducting an experiment all along,” said Freeman, senior advisor to Friends of the Earth. “They were operating reactors with equipment that they knew had major problems. That’s unforgivable.

“Edison gambled that additional safety measures were not needed when they gave the highest priority not to safety but speed of construction. Of course they didn't know for sure that the equipment would fail, but they did know that they were taking a risk and they lost on their gamble. Gambling with the safety of a nuclear plant is not acceptable and an egregious misuse of ratepayer’s money.”
The mounting revelations of Edison’s deception dash the utility’s request to restart San Onofre rector Unit 2 this summer, said Moglen. “The NRC must make sure these reactors are not restarted with this damaged equipment, and the PUC must make sure no ratepayer money is spent to operate, let alone restart, this failed plant,” he said.

After Senator Boxer released the 2004 letter yesterday, the California PUC issued a statement asking “whether Edison had a duty to disclose the letters earlier.” PUC Executive Director Paul Clanon said the Commission “need(s) to investigate whether Edison took unnecessary risks, or tried to evade regulatory oversight.“ Edison quickly released the 2005 letter, along with other suppressed internal documents (1, 2, 3, 4, 5, 6, 7) that may hold more revelations. Friends of the Earth is currently evaluating the remaining documents.