Traditional owners to walk to protest Kintyre mine - The West Australian

More than a 100 traditional owners from the regions around the proposed Kintyre mine site will undertake an eight-day protest against uranium mining operations in the East Pilbara next month.
Members of the Parnngurr and Martu communities will be walking through the Karlamilyi National Park to the proposed uranium mine from June 4-12, to send a message of opposition to Canadian-based Cameco’s uranium mine plans at Kintyre.

Parnngurr and Martu people have also released a joint statement with Leonora traditional owners around the proposed Yeelirie uranium mine, to coincide with Cameco’s annual general meeting held in Saskatoon, Canada, last week...

more: Traditional owners to walk to protest Kintyre mine - The West Australian

10 Near Misses at U.S. Nuclear Power Plants Considered Precursors to a Meltdown 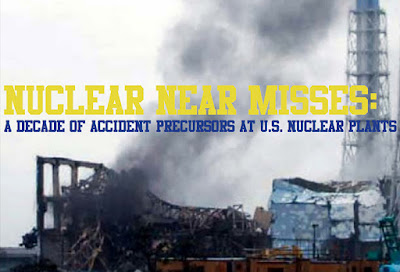 Following the 30th anniversary of the Chernobyl nuclear disaster, Greenpeace USA released a new report Tuesday on the 166 near misses at U.S. nuclear power plants over the past decade. Of the incidents identified in Nuclear Near Misses: A Decade of Accident Precursors at U.S. Nuclear Plants, 10 are considered by the Nuclear Regulatory Commission (NRC) to be important precursors to a meltdown.
“Contrary to NRC commissioners’ claims, there is nothing safe about the nuclear reactors in the United States,” Greenpeace Nuclear Policy Analyst Jim Riccio said. “Thirty years after Chernobyl and five years after Fukushima, it is clear that these kinds of disasters could absolutely happen here. It is time for the NRC to listen to the whistleblowers within its own ranks and address these longstanding issues and vulnerabilities...”

more: 10 Near Misses at U.S. Nuclear Power Plants Considered Precursors to a Meltdown


whats up: myth of nuclear safety

#BustTheMyth – nukes are NOT "carbon-free," clean, safe, green or affordable!

Email ThisBlogThis!Share to TwitterShare to FacebookShare to Pinterest
Labels: #BustTheMyth, Greenpeace, myth of nuclear safety, US

Emergency legal filing to the NRC demands reactor 2 not restart, immediate shut down of reactor 3

WASHINGTON - The disappearance and disintegration of more than 1 in 4 critical bolts holding the Indian Point nuclear reactor cooling system together is far more serious than owner Entergy admits. On Tuesday, May 24th Friends of the Earth filed an emergency petition with the Nuclear Regulatory Commission calling for immediate action by the agency. The filing demands keeping reactor 2 offline until the NRC certifies that the problem is fully diagnosed and fixed, and that the reactor is safe to operate. It also calls for an immediate shutdown to inspect reactor 3 to ensure that the reactor’s bolts have not also disintegrated. Reactor 3 is the twin of reactor 2 but Entergy has rejected inspecting it until 2017 despite it being the same design and almost as old. Friends of the Earth also released an expert report detailing the breadth and depth of the bolt problem.

Although critical to the core cooling system (essential to preventing a nuclear meltdown), bolts securing the plates that channel cooling water through the reactor core are broken, degraded or missing in reactor 2. Entergy is pushing to simply replace the bolts and restart the reactor in June—in time for the profitable peak summer energy season. The company has said that it will conduct a root cause analysis of why the bolts broke or disappeared but are conducting the repairs without completing such a comprehensive review.

“This is a matter of common sense denied: if a machine breaks, you have to figure out what is wrong and then fix it,” said Damon Moglen of Friends of the Earth. “Instead, at Indian Point, Entergy has decided that the priority is to get the damaged reactor up and running by summer to protect their profits. They are making a theoretical fix to a serious but undiagnosed problem. This is a recipe for disaster.”

The technical report also released by Friends of the Earth concludes that the more than 25% failure rate of the bolts is extraordinarily high and appears to be unprecedented in the history of the global nuclear power industry. Without a full root cause analysis approved by the NRC, the report warns that there can be no assurance that the remaining old bolts will not fail or that simply replacing bolts will fix the problem.

“Only a utility that puts profits ahead of public safety would resume running this nuclear reactor without an “all clear” from the federal regulator,” said Dave Freeman, who was the head of NYPA in the mid-1990s, and operated the nuclear reactors at that time.

Just as the Space Shuttle Challenger was brought down by a seemingly minor faulty O-ring, Indian Point is in danger from the damaged and missing bolts. Located a mere 26 miles from New York City,in the right weather conditions a radiation release at Indian Point could reach Times Square in as little as 90 minutes, making evacuation of New York City impossible and rendering the area uninhabitable indefinitely. The Indian Point reactors’ licenses expired in 2013 and 2015, respectively, and the plant is operating beyond its 40-year life span. The NRC must intervene and take immediate steps to protect the public.
###

Do Nuclear Accidents Generate a "Garden of Eden" for Wildlife?

no, radiation is NOT good for you, or wildlife!


Do Nuclear Accidents Generate a "Garden of Eden" for Wildlife? - YouTube


Published on May 21, 2016
This lecture was recorded May 19th,. 2016 at Scripps Institution of Oceanography, La Jolla, California
----------------------------------------­----------------------------
Given increasing energy needs related to global development, and the specter of climate change related to CO2 emissions from fossil fuels, there is an urgent need for large scale energy production that does not involve the production of greenhouse gasses. Nuclear energy is one possible solution that has been embraced by many developing countries (e.g. China). But the accidents at Three Mile Island, Chernobyl and most recently Fukushima, Japan, have demonstrated the vulnerability of this technology to human error, design flaws and natural disasters and these accidents have resulted in enormous health, environmental and economic costs that must be factored into any energy policy that includes nuclear as an option. Studies of natural systems are essential since they provide a bellwether for the potential long-term consequences for human populations that by necessity and policy continue to inhabit contaminated regions. Professor Mousseau, discusses his studies of plants and animals living in Chernobyl and Fukushima. Extensive research on birds, insects, rodents and trees has demonstrated significant injury to individuals, species and ecosystem functioning related to radiation exposure He presents an overview of the effects of radiation on DNA, birth defects, infertility, cancer, and longevity, and its consequences for the health and long-term prospects of wildlife living in radioactive regions of the world.

Tim Mousseau (PhD '88, McGill) is a Professor of Biological Sciences at the University of South Carolina. Past positions include Dean of the Graduate School and Associate Vice President for Research at USC, and as a Program Officer for Population Biology at the National Science Foundation. His research is concerned with the ecology and evolution of animals and plants with special interests in how adaptations to changing environments evolve in natural populations and the evolution of adaptive maternal effects. He has authored or edited 10 volumes and published more than 190 scientific papers. He is a Fellow of the American Association for the Advancement of Science, The American Council of Learned Societies, and the National Explorers Club. Tim Mousseau full bio: http://cricket.biol.sc.edu/Mousseau

How it Works: Water for Nuclear | Union of Concerned Scientists

more: How it Works: Water for Nuclear | Union of Concerned Scientists

#NuclearIsDirty: Chernobyl 30 -- A Look from the Inside, with Lucas Hixson - YouTube

#NuclearIsDirty: Chernobyl 30 -- A Look from the Inside, with Lucas Hixson - YouTube

Published on May 2, 2016 by nirsnet
In this installment in our #NuclearIsDirty * series, we provide an inside view from nuclear field technician Lucas Hixson on the impacts of the 1986 Chernobyl disaster and the ongoing efforts to manage the site.

Lucas recently traveled to Ukraine and spent ten days with people who work at the Chernobyl reactor site today, 30 years after the consequential release of radioactivity from this site began. He takes us from the moment the Unit 4 reactor failed on April 26, 1986, the aftermath, and the ongoing mitigation work, up to his own recent experiences living with today’s workers at the site of one of the largest man-made radioactive releases on the planet. Chernobyl today.

Lucas shared his insights about the radiological impacts and consequences that could reframe our understanding of major reactor disasters.