find your closest nuke plant(s), look up the type and status of the reactor(s) and/or other facilities...

who is nuking in your back yard ???

see also, below: LINKS and an extensive list of nuclear reactors in the US - - - way more than the "104 nuclear plants" than you hear about 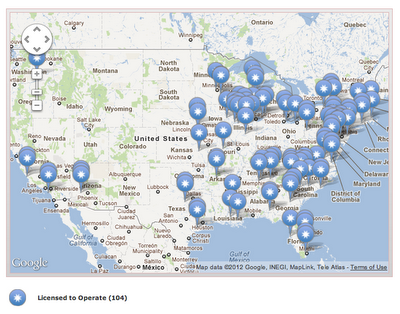 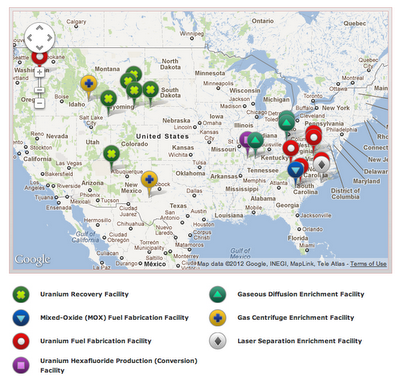 
"NEI's Mission: The Nuclear Energy Institute (NEI) is the policy organization of the nuclear energy and technologies industry and participates in both the national and global policy-making process.

NEI’s objective is to ensure the formation of policies that promote the beneficial uses of nuclear energy and technologies in the United States and around the world."

* Exelon Corporation is an electricity generating and distributing company headquartered in theChase Tower in the Chicago Loop area of Chicago.[2] It was created in October 2000 by the merger of PECO Energy Company and Unicom, of Philadelphia and Chicago respectively. Unicom owned Commonwealth Edison. Exelon has 5.4 million electricity customers and serves 485,000 natural gas customers in the Philadelphia suburbs. In October, 2009 Exelon had full or majority ownership of 17 nuclear reactors in 10 nuclear power plants. - Exelon - Wikipedia, the free encyclopedia


Areva (formerly Areva NP) runs fabrication facilities in Lynchburg, Virginia and Richland, Washington. It also has a Generation III+ plant design, EPR (formerly the Evolutionary Power Reactor), which it plans to market in the US.[68]


Westinghouse operates a fuel fabrication facility in Columbia, South Carolina,[69] which processes 1,600 metric tons Uranium (MTU) per year. It previously operated a nuclear fuel plant in Hematite, Missouri but has since closed it down.


GE pioneered the BWR technology that has become widely used throughout the world. It formed the Global Nuclear Fuel joint venture in 1999 with Hitachi and Toshiba and later restructured into GE-Hitachi Nuclear Energy. It operates the fuel fabrication facility in Wilmington, North Carolina, with a capacity of 1,200 MTU per year.


The American Nuclear Society (ANS) scientific and educational organization that has academic and industry members. The organization publishes a large amount of literature on nuclear technology in several journals. The ANS also has some offshoot organizations such as North American Young Generation in Nuclear (NA-YGN).
The Nuclear Energy Institute (NEI) is an industry group whose activities include lobbying, experience sharing between companies and plants, and provides data on the industry to a number of outfits.

Many license applications filed with the Nuclear Regulatory Commission for proposed new reactors have been suspended or cancelled.[1][2] As of October 2011, plans for about 30 new reactors in the United States have been "whittled down to just four, despite the promise of large subsidies and President Barack Obama’s support of nuclear power, which he reaffirmed after Fukushima".[3] A reactor currently under construction in America, is at Watts Bar, Tennessee, was begun in 1973 and may be completed in 2012.[4][5] Matthew Wald from the New York Times has reported that "the nuclear renaissance is looking small and slow".[6]


Nuclear power in the United States - Wikipedia, the free encyclopedia

As of April 2011, a total of 45 groups and individuals are formally asking the U.S. Nuclear Regulatory Commission (NRC) to suspend all licensing and other activities at 21 proposed nuclear reactor projects in 15 states until the NRC completes a thorough post-Fukushima reactor crisis examination. The petitioners also are asking the NRC to supplement its own investigation by establishing an independent commission comparable to that set up in the wake of the serious, though less severe, 1979 Three Mile Island accident.[113][114]

As of December 2011, construction by Southern Company on two new nuclear units has begun, and they are expected to be delivering commercial power by 2016 and 2017.[118][119] But, looking ahead, experts see continuing challenges that will make it very difficult for the nuclear power industry to expand beyond a small handful of reactor projects that "government agencies decide to subsidize by forcing taxpayers to assume the risk for the reactors and mandating that ratepayers pay for construction in advance". Mark Cooper suggests that the cost of nuclear power, which already had risen sharply in 2010 and 2011, could "climb another 50 percent due to tighter safety oversight and regulatory delays in the wake of the reactor calamity in Japan".[120]


In 2001 the United States mined only 5% of the uranium consumed by its nuclear power plants. The remainder was imported, principally from Russia and Australia.[52] After 2001, however, uranium prices steadily increased, which prompted increased production and revived mines.


The United States Enrichment Corporation (USEC) performs all enrichment activities for U.S. commercial nuclear plants, using 11.3 million SWUs per year at its Paducah, Kentucky site. The USEC plant still uses gaseous diffusion enrichment, which has now been proved to be inferior to centrifuge enrichment. However, the capital cost of such a plant is so high that the plant will go through a few more years of operation before being replaced by a modern centrifuge plant.
Currently, demonstration activities are underway in Oak Ridge, Tennessee for a future centrifugal enrichment plant. The new plant will be called the American Centrifuge Plant, which has an estimate cost of 2.3 billion USD.[53]


Nuclear reprocessing has been politically controversial because of the potential to contribute to nuclear proliferation, the potential vulnerability to nuclear terrorism, the political challenges of repository siting, and because of its high cost compared to the once-through fuel cycle.[54] The Obama administration has disallowed reprocessing of nuclear waste, citing nuclear proliferation concerns.[55]


Recently, as plants continue to age, many on-site spent fuel pools have come near capacity, prompting creation of dry cask storage facilities as well. Several lawsuits between utilities and the government have transpired over the cost of these facilities, because by law the government is required to foot the bill for actions that go beyond the spent fuel pool.
There are some 65,000 tons of nuclear waste now in temporary storage throughout the U.S.[56] Since 1987, Yucca Mountain, in Nevada, had been the proposed site for the Yucca Mountain nuclear waste repository, but the project was shelved in 2009 following years of controversy and legal wrangling.[56][57] An alternative plan has not been proffered.[58]
At places like Maine Yankee, Connecticut Yankee and Rancho Seco, reactors no longer operate, but the spent fuel remains in small concrete-and-steel silos that require maintenance and monitoring by a guard force. Sometimes the presence of nuclear waste prevents re-use of the sites by industry.[59]

whether OPERATING OR NOT: many of these sites will contain nuclear fuels and/or concentrations of extremely toxic and dangerous radioactive waste, with various rates of surrounding contamination from discharges and "leakage." also: this is a list of REACTORS, not other types of facilities such as processing and storage sites.


note: "Cocooning" or "Entombment" (also referred to as safe enclosure) of a nuclear reactor is a method of nuclear decommissioning in which radioactive contaminants are encased in a structurally long-lived material, such as concrete, that will last for a period of time to ensure the remaining radioactivity is no longer of significant concern. The entombment structure is appropriately maintained and continued surveillance is carried out until the radioactivity is no longer a major concern, permitting decommissioning and ultimate unrestricted release of the property. - Nuclear entombment - Wikipedia, the free encyclopedia

- here is a really scary page... especially seeing how many are being built in China right now - 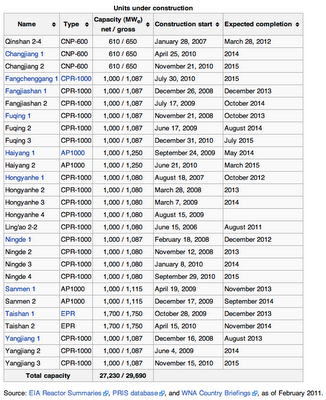