- nuclear power is poisoning our biosphere, and is so dangerous that it should not be an option - its use is immoral and criminal and can be no "cure" for climate change

nobody has the right to shackle future generations with nuclear waste and inevitable radioactive pollution for any reason whatsoever, nor to take the risk of catastrophic accidents which are known to happen


- fossil fuels are also poisoning our planet, changing its climate to such an extreme degree that human civilization and natural systems will suffer dire consequences

- investors need to pull out of oil, coal, gas, uranium and nuclear ASAP and get on track for climate change 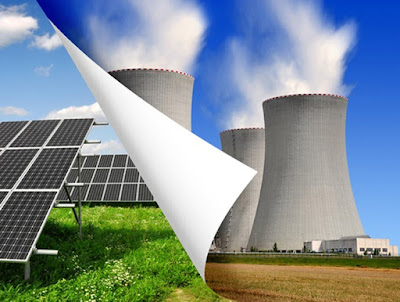 - wind and solar are GOOD BUSINESS with plenty of money to be made right away - also geothermal and wave - there are lots of possibilities and opportunities - algae, biogas etc., entirely within our reach simply through ingenuity and implementation

Nukes are NOT clean, #CO2/#carbon-free, #green, safe, or affordable! Put #PandorasPromise back in the box >>

• #BustTheMyth :: you can't nuke global warming! (tag on this blog)

BEYOND NUCLEAR: Would you rather store solar power overnight, or radioactive waste forevermore?!

"Nukes are not carbon-free" | C.A.N. Coalition Against Nukes 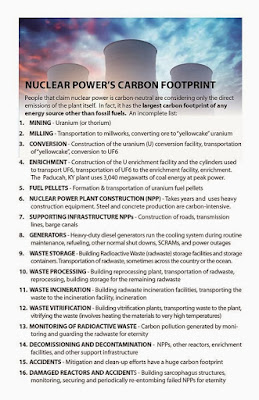 When the nuclear industry claims that nuclear power is "carbon -free", it is basically taking advantage of the fact that many people don’t know the difference between a "carbon footprint" and "direct carbon emissions". Our individual direct CO2 emissions are basically limited to whatever CO2 we exhale when we breathe- but our carbon footprint is much larger than those limited emissions. Our individual carbon footprint depends on how much gasoline we use, how much electricity we use, and, in general, how much of anything and everything we consume or use. Studies that show nuclear is carbon-neutral are considering only the direct emissions, not the carbon footprint.

That limited and simplistic approach is scientifically and mathematically incorrect. If we take a good hard look at the carbon-footprint of nuclear power, we discover that it has the largest carbon footprint of any energy source other than the fossil fuels. Very large carbon emissions are generated by various different stages in the production of nuclear energy, thereby increasing CO2 in the atmosphere. Tons of carbon emissions are generated by [the following] activities which are all necessary in the production of nuclear energy..."

more: Nukes are not carbon-free"

working towards a complete and legally sound case with a list of specific crimes and claimants, supporting documents, co-signers, etc., to bring before both The International Criminal Court and The United Nations

Nuclear Power is a Crime Against Humanity
International Criminal Court Rome Statute
Article 7: Crimes against humanity 1. For the purpose of this Statute, "crime against humanity" means any of the following acts when committed as part of a widespread or systematic attack directed against any civilian population, with knowledge of the attack:…. (k) Other inhumane acts of a similar character intentionally causing great suffering, or serious injury to body or to mental or physical health. 2. For the purpose of paragraph 1: (a) "Attack directed against any civilian population" means a course of conduct involving the multiple commission of acts referred to in paragraph 1 against any civilian population, pursuant to or in furtherance of a State or organizational policy to commit such attack….


A Simple Statement On Nuclear Power and Climate Change - NIRS

We're getting a little tired hearing nuclear industry lobbyists and pro-nuclear politicians allege that environmentalists are now supporting nuclear power as a means of addressing the climate crisis. We know that's not true, and we're sure you do too. In fact, using nuclear power would be counterproductive at reducing carbon emissions. As Amory Lovins of Rocky Mountain Institute points out, "every dollar invested in nuclear expansion will worsen climate change by buying less solution per dollar..."

The simple statement below will be sent to the media and politicians whenever they misstate the facts. We hope you and your organization will join us and sign on in support here.

A Simple Statement On Nuclear Power and Climate Change 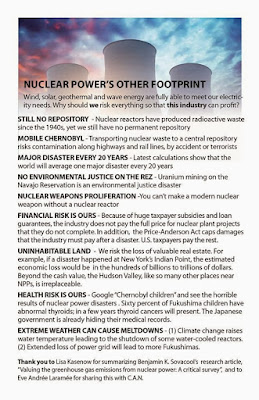 Wind, solar, geothermal and wave energy are fully able to meet our electricity needs. Why should we risk everything so that this industry can profit?

STILL NO REPOSITORY - Nuclear reactors have produced radioactive waste since the 1940s, yet we still have no permanent repository

MOBILE CHERNOBYL - Transporting nuclear waste to a central repository risks contamination along highways and rail lines, by accident or terrorists

FINANCIAL RISK IS OURS - Because of huge taxpayer subsidies and loan guarantees, the industry does not pay the full price for nuclear plant projects that they do not complete. In addition, the Price-Anderson Act caps damages that the industry must pay after a disaster. U.S. taxpayers pay the rest.

UNINHABITABLE LAND - We risk the loss of valuable real estate. For example, if a disaster happened at New York’s Indian Point, the estimated economic loss would be in the hundreds of billions to trillions of dollars. Beyond the cash value, the Hudson Valley, like so many other places near NPPs, is irreplaceable.

HEALTH RISK IS OURS - Google “Chernobyl children” and see the horrible results of nuclear power disasters . Sixty percent of Fukushima children have abnormal thyroids; in a few years thyroid cancers will present. The Japanese government is already hiding their medical records.

EXTREME WEATHER CAN CAUSE MELTDOWNS - (1) Climate change raises water temperature leading to the shutdown of some water-cooled reactors. (2) Extended loss of power grid will lead to more Fukushimas.

whats up: NUCLEAR POWER’S OTHER FOOTPRINT

via Coalition Against Nukes 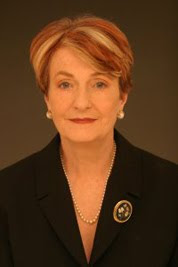 Dr. Helen Caldicott has passionately devoted the last 40 years to educating the global community about the inherent risks and dangers of nuclear energy and weapons and the critical changes needed to restore and help save our embattled Earth. The Australian-born medical doctor (a pediatrician) and former Nobel Peace Prize nominee is the author of five books and the founder of several organizations including Physicians for Social Responsibility, Women's Action for New Directions (WAND) and The Helen Caldicott Foundation/NuclearFreePlanet.org. I recently had the opportunity to talk to the world renowned activist and environmental prophet at Green America's Green Festival in New York City, where she delivered an urgent and electrifying speech. Dr. Caldicott, who has been outspoken about the health and environmental dangers of nuclear power since before the Three Mile Island and Chernobyl meltdowns, prays that we will take heed from the recent Fukushima nuclear disaster, which resulted in the Japanese government shutting down all 54 of Japan's nuclear reactors, and spark a global trend to close nuclear power plants. Her frustration and anger at the lack of meaningful progress on this issue is palpable; as is her inspiring hope and belief in the collective power of individual citizens to raise their voices and create the political will to take action. What's at stake, as she reminds us in this candid interview, is our moral and spiritual imperative to protect our children and our Mother Earth. As she bluntly puts it, " The planet's in the intensive care unit, critically, acutely ill, and now we are all physicians to a dying planet." She urges, "Let the data sink in and then get off your couches to save the planet for your children."

Marianne Schnall: What is the one message you are most hoping to get out there?

Helen Caldicott: There isn't one message, there are three. One is that we are in dire danger from global warming and that unless we pull our socks up and stop burning coal and stop driving our SUV's around doing five miles to the gallon and stop fracking and natural gas, we're doomed. The temperature is on the way to be three degrees centigrade hotter by the middle of the century, which is almost antithetical to human existence, and six degrees by the end of the century - this is the top leading scientific data now that is available. I mean, we're killing the earth! Overtly. And we don't love our children enough, because if we did, we would be taking the necessary steps to stop burning coal and saving energy, you know.."


Nukes are NOT clean, carbon-free, green, safe, or affordable! Put Pandoras Promise back in the box >>

whats up: WHY NUKES CAN'T SAVE THE PLANET FROM CLIMATE CHANGE