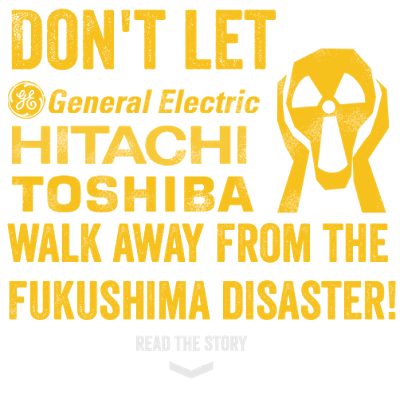 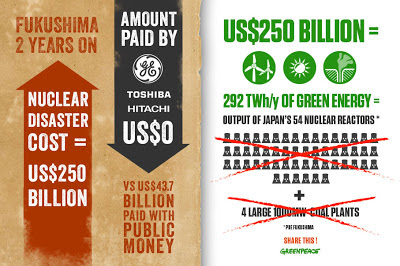 General Electric, Hitachi and Toshiba designed, built and serviced the reactors which directly contributed to the Fukushima nuclear disaster, yet these companies have not paid one cent of the cost for the reactor failures.

The cost of the Fukushima nuclear disaster is estimated at $250 billion US dollars. 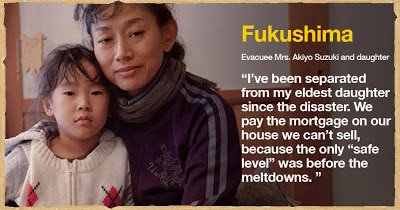 Hundreds of thousands of people in Japan lost their homes, jobs and communities. None of them have received enough compensation to rebuild their lives.

All of the costs from the nuclear meltdown fell on TEPCO, the operator of Fukushima, which could not afford it and was nationalised. The costs of Fukushima are being paid by the Japanese people themselves, as taxpayers they are footing the bill for this nuclear disaster.


The situation in Japan is not an exception, if you live in or near a country with nuclear reactors, it is likely that nuclear companies could walk away from an accident near you without paying any of the costs. General Electric, Hitachi and Toshiba should pay for the damage caused by their reactors!


The nuclear reality: lives in limbo after Fukushima | Greenpeace International

As a nuclear campaigner, I have seen the nuclear industry walk away from its mistakes many times, ignoring people’s suffering.

But it is the terrible effect on people of a nuclear disaster such as Fukushima that really brings home the flaws of the nuclear system.

Nearly two years after the disaster, the lives of hundreds of thousands of people in Japan are still being disrupted. When the disaster hit, their lives were turned upside down. They were forced from their homes, they lost their jobs, families were split up and communities were abandoned due to the radioactive fallout.

People are not able to get fair compensation. Many are still unable to return home or rebuild their lives elsewhere. Imagine living in limbo like that, stuck between past and future.

How can this be happening?

Blame the unfair system that protects the nuclear industry from paying for its failures. This system is called nuclear liability. It is a joke... [more]