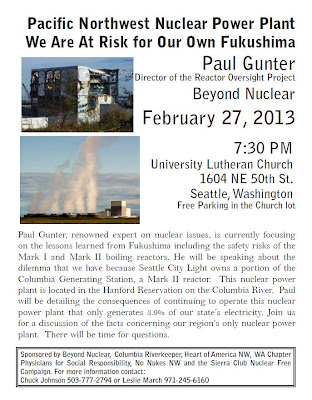 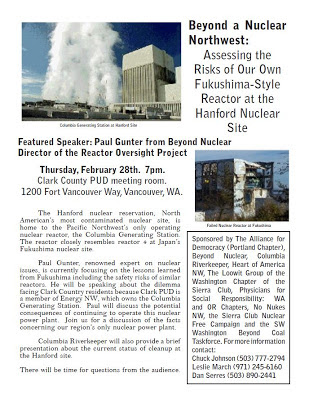 
Seattle - Paul Gunter, renowned expert on nuclear issues and director of Beyond Nuclear will speak in Seattle and Vancouver, WA this week.  Gunter has been focusing on the lessons we should have learned from the Fukushima nuclear disaster in Japan nearly two years ago. This includes supporting a shutdown of GE Boiling Water Reactors like the Northwest’s only nuclear power plant, the Columbia Generating Station (CGS) located on the Hanford Nuclear Reservation along the Columbia River.  Gunter will identify the risks and future consequences if we don’t protect our own Fukushima-style boiling water reactor from containment failure.  (http://www.beyondnuclear.org/freeze-our-fukushimas)

A coalition of environmental and citizen action groups including WA/OR Physicians for Social Responsibility, Sierra Club Nuclear Free Campaign, and No Nukes NW are holding public meetings in Seattle, WA and Vancouver, WA with Gunter as the keynote speaker.  The coalition is asking the ratepayers of Energy Northwest (a group of NW utilities including the City of Seattle and Clark County formerly known as the Washington Public Power Supply System or WPPSS) to call for a shutdown of the Columbia Generating Station nuclear plant in favor of renewable energy and efficiency.

Miriam German, an organizer with Portland based No Nukes NW, brings up the question of whether the CGS could survive a Fukushima like event.  “The plant is located in an area that has seismic activity, wildfires and according to the Nuclear Regulatory could be vulnerable to floods, how will this plant hold up in an emergency?  Do we want to find out?“

The coalition cites the boiling water reactor as dirty, dangerous, and expensive.  “This is an irresponsible risk to the people, the environment, and the economy of the Pacific Northwest.  Rather than courting disaster in return for less than 4% of the region’s electricity,” says Tom Buchanan, Vice President of Washington Physicians for Social Responsibility.  “The CGS nuclear plant should be shut down as rapidly as possible and its highly radioactive wastes stabilized.”

“It begs the question whether we are truly committed to renewable energy and efficiency when we continue to commit the public’s dollars to a dirty and dangerous boiling water reactor” remarks Leslie March, Sierra Club Nuclear Free Campaign.

Public meetings will be held in:

http://www.nuclearpowerdanger.com
The center of this Toxic Plume is located approximately 160 miles southeast of Seattle, Washington. This plume is produced by 1 reactor located at the Columbia Generating Station.

“They plan to bring in an experimental fuel made from surplus weapons plutonium. Not only is the plant not designed for this MOX type fuel, using the plutonium based fuel will spread plutonium radiation downwind of the plant. This plant has the worst unexpected shutdown record of all Nuclear Power Plants in the US. Ground leaks have been reported from its elevated Radioactive Spent Fuel Pool.”
http://www.nuclearpowerdanger.com/plume-maps/columbia-radiation-plume-map.php

Dirty, Dangerous and Expensive:
The Columbia Generating Station, which produces less than 4% of the region’s electricity, is an irresponsible risk to the people, the environment, and the economy of the Pacific Northwest.  The CGS nuclear plant should be shut down as rapidly as possible.

Who are we?
Beginning the fall of 2011, a number of environmental groups in the region began to organize against extending the operation of this demonstrably dangerous nuclear plant, the Columbia Generating Station.  These groups included the Oregon and Washington Chapters of Physicians for Social Responsibility, local chapters of the Sierra Club, Heart of America Northwest, Hanford Challenge, Columbia Riverkeeper, the Alliance for Democracy, and a new group – No Nukes NW –  forged of the Portland Occupy movement.
Through a series of conferences, rallies, meetings and strategy sessions, we have coalesced around a multipronged effort to demonstrate the unsafe nature of operating this nuclear plant and the manageable consequences of shutting it down.  We are now beginning the process of seeking support throughout the utility districts of the State of Washington, which collectively own the nuclear plant, and to present our findings to appropriate decision-makers and opinion leaders in the region in order to shut down CGS.
The campaign has begun and we are in it to win it!