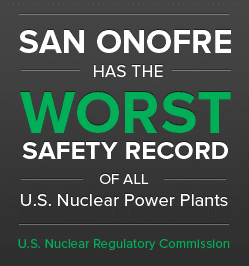 Washington, D.C. -- Today Friends of the Earth sent a letter to Nuclear Regulatory Commission Chairman Alison Macfarlane demanding that the agency release a document that apparently reveals that Southern California Edison had foreknowledge of potential design flaws with steam generators it installed at the San Onofre nuclear reactors in Southern California.


The request from Friends of the Earth comes one day after Senator Barbara Boxer (D-Calif.) and Representative Edward Markey (D-Mass.) released a statement calling on Macfarlane and the NRC to investigate allegations contained in a Mitsubishi Heavy Industries document that apparently reveal that Southern California Edison was aware of potential design flaws in the steam generators at San Onofre, which ultimately led to a radioactive release and the closure of both reactors last January.
In the letter to NRC Chairman Macfarlane, Friends of the Earth President Erich Pica demanded that the NRC release to the public the Mitsubishi document and all related documents indicating Edison’s awareness of the potential flaws in its replacement reactor steam generators.
Friends of the Earth also demanded that the NRC explain why this and related documents have been withheld from the two proceedings in which Friends of the Earth is involved at the NRC -- before the agency’s staff on a 2.206 proceeding and before the Atomic Safety and Licensing Board, both of which contend that operation of the defective equipment should trigger rigorous, public licensing amendment processes.
"At stake is not only the NRC’s own credibility as the nation’s nuclear regulator, but also the right of the millions of Southern Californians who live near these crippled reactors to know the truth about what Edison knew about this dangerously defective equipment," said Erich Pica. "It is not acceptable for the NRC to suppress these documents pleading that they might contain proprietary information -- when millions of families are at risk it is the right of the public, not the profits of the company, that is most important."
###
http://nukefree.foe.org/news/2013-02-nrc-should-release-document-indicating-prior-knowledge-of-design-problems-at-san-onofre