TOKYO - Thousands of Japanese marched to celebrate the last of this nation's 50 nuclear reactors switching off Saturday, shaking banners shaped as giant fish that have become a potent anti-nuclear symbol.

Japan will be without electricity from nuclear power for the first time in four decades when one of three reactors at Tomari nuclear plant in the northern island of Hokkaido goes offline for routine maintenance checks.

After last year's March 11 quake and tsunami set off meltdowns at Fukushima Dai-ichi plant, no reactor stopped for checkups has restarted amid growing public worries about the safety of nuclear technology. 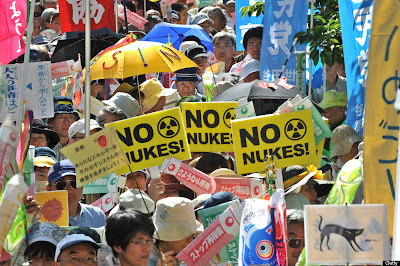 People gather at an anti-nuclear demonstration on the Children's Day national holiday, calling for a safer future for younger generations at a park in Tokyo on May 5, 2012. The last working reactor in Japan is to be switched off May 5, 2012, leaving the country without nuclear power just over a year after the world's worst atomic accident in a quarter of a century. AFP PHOTOS / KAZUHIRO NOGI

"Today is a historical day," shouted Masashi Ishikawa to a crowd gathered at a Tokyo park, some holding traditional "Koinobori" carp-shaped banners for Children's Day that have grown into a symbol of the anti-nuclear movement.

"There are so many nuclear plants, but not a single one will be up and running today, and that's because of our efforts," Ishikawa said... 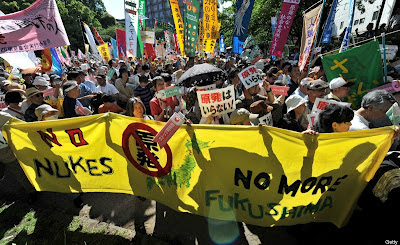