Remembering Fukushima And What You Can Do | Risky Reactors & Deadly Waste

WATCH THE VIDEO, then DO SOMETHING

the March 11 one-year anniversary of the Tohoku Earthquake and Tsunami and Fukushima Nuclear Catastrophe is upon us. Nature on that day reminded us how vulnerable we truly are; and, even though nuclear power is deemed "safe" by those in power, we clearly see otherwise. 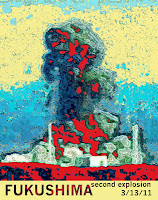 we now know that the reactors at Fukushima Daiichi began to melt down almost immediately. they soon starting blowing up, sending shockwaves around the world as radiation spread and governments lied.

one year later, the reactors are not yet under control and continue to release radiation into the environment. the land is poisoned, the sea is poisoned... thousands will be unable to ever return home, and many will ultimately die as a result of this ongoing catastrophe - the story is far from over!

the "clean up" at Fukushima will take decades, yet here in the U.S. the NRC lies cozily in bed with the nuclear power industry, approving permits for new nukes and extending those for antique reactors (some of which are literally falling apart).

won't you do something today to help end the nuclear profiteering and cover-ups which will cost future generations untold grief and suffering?

you can begin by checking out Beyond Nuclear's new video (below), and downloading some of their informative materials. then take action - talk to your family, friends and neighbors; share this post on facebook and other social media; contact your representatives.

it is time to demand an end to the inherently dangerous use of nuclear power, especially when we know that truly clean and green alternatives are available.

Remembering Fukushima And What You Can Do

• Watch our new video! Remembering Fukushima. Ed Asner calls for nuclear power plants to be shut down for good.


On March 11, 2011, four reactors at Fukushima-Daiichi, Japan, went into crisis after an earthquake and Tsunami knocked out critical electricity supplies. Three of the 4 reactors at least partially melted down. The fourth likely released massive amounts of Cesium 137. The resulting tragedy has left people permanently displaced, the land around the Fukushima plant too radioactive for human habitation and animals abandoned who starved or now roam wild. The event sent shock waves around the world and many countries are now phasing out their nuclear plants. Asner urges us to not to wait until its too late and instead end nuclear power today. He urges you to support Beyond Nuclear in our work to help make a nuclear-free world a reality.

• New Freeze our Fukushimas pamphlet! Download and distribute our campaign pamphlet on shutting down the US GE Mark I Boiling Water Reactors.

• The Freeze our Fukushimas Fact Sheet provides a more detailed and referenced overview of the Mark I reactor and the campaign to shut the 23 operating in the US. Download and use for reference.

• Mark I fuel pools. Download our Fact Sheet about the specific dangers of the high-level radioactive waste storage pools.

All of the above publications can also be ordered in hard copy, and in quantity, directly from Beyond Nuclear. Call 301.270.2209 or order via info@beyondnuclear.org.

Please consider making a donation to Beyond Nuclear today. Your support will help us build a grassroots movement to close dangerous nuclear plants and create a safe energy future for our children.

Update on defending the Great Lakes against risky reactors

A lot has happened in the past few weeks in Beyond Nuclear's efforts to shut down the Palisades reactor on Lake Michigan and the Davis-Besse reactor on Lake Erie. NRC was forced to admit that Palisades has the most embrittled reactor pressure vessel in the U.S. NRC's repeated regulatory rollbacks have put it at risk of fracturing like a hot glass under cold water due to Pressurized Thermal Shock. And thanks to revelations by Congressman Dennis Kucinich, we've contended that Davis-Besse's containment cracking is so severe that its outer layer of steel reinforcement rebar is no longer performing its safety function. We joined Congressman Kucinich in challenging Davis-Besse's root cause report, which blames the cracking on the Blizzard of 1978, as a "snow job of convenience." more 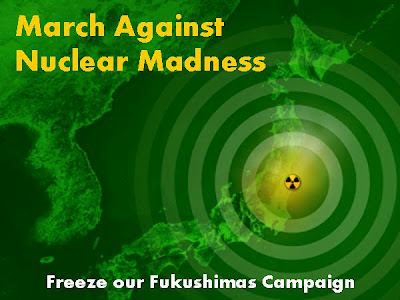 For a listing of the scores of incredible events going on around the March 11 first year commemoration of the Fukushima Daiichi nuclear disaster, please see the latest version of our March Against Nuclear Madness calendar.

more videos from Beyond Nuclear

Nov. 2, 2011. Representatives from Beyond Nuclear and NIRS submitted a petition and letters of support at the Japanese Embassy in Washington, DC asking that the Japanese government and TEPCO not incinerate or mobilize radioactive waste created by the Fukushima-Daiichi reactor disasters.

Mr. Burns tried his best to sabotage a protest organized by Beyond Nuclear outside the US Department of Energy in Washington DC on Halloween. This was the date the DOE chose to close its public comment period on its Blue Ribbon Commission on America's Nuclear Future investigation into what to do with US radioactive waste now piled up almost 70 years high at US reactor sites. Watch Mr. Burns deliver his ideas to camera, and Paul Gunter of Beyond Nuclear, too.The BRC has issued a draft report with nothing new - just the same old bad ideas. See the Beyond Nuclear website at www.beyondnuclear.org, for more. 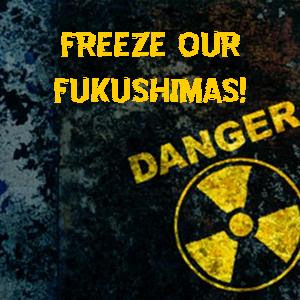 "Freeze Our Fukushimas" is a national campaign created by Beyond Nuclear to permanently suspend the operations of the most dangerous class of reactors operating in the United States today; the 23 General Electric Mark I Boiling Water Reactors, the same flawed design as those that melted down at Fukushima-Daiichi in Japan.

A very brief update. We have posted many new actions all across the U.S. on our Action page here. From Alabama to Wisconsin, New York to California, there is almost certainly one not too far from you.

We are still adding actions as we receive word about them. If an action in your area isn't listed, please send the info to nirsnet@nirs.org. Actions taking place after this weekend will be added early next week.

Don't forget to click the link for global actions at the top of our action page to see the amazing number of events happening this weekend all across the world!

We sent out a press advisory today to thousands of reporters across the world on anniversary actions. We encourage you to send it to your local media so they will realize the large number of events going on this weekend.

New England's SAGE Alliance has put out a call for actions across the country on March 24 to defend democracy and support the shutdown of Vermont Yankee and all GE Mark I reactors (and, for that matter, all reactors!). As you probably know, the Vermont legislature voted for permanent shutdown of Vermont Yankee on March 22. But legal wrangling from the Entergy Corporation will almost certainly delay that. Actions already have been set up for Vermont, Massachusetts and New York. We encourage all groups, and especially all groups near Mark I reactors, to set up a support action. For more information and to help coordinate, contact Kendra Ulrich of the Sage Alliance here.

Our movement is growing! Let's join together this weekend and beyond...

Thanks for all you do,

A reminder: if you're on Facebook, please vote here to send NIRS to Netroots Nation and help get our information out to the nation's largest conference of progressive bloggers and political activists. Deadline to vote is March 14.

Your contributions make our work--and the work of all anti-nuclear organizations--possible. This Fukushima anniversary weekend, please donate to NIRS here, or donate to the anti-nuclear organization nearest you (or both!). But please do help. NIRS, and all of the groups working hard across the country deeply appreciate your support and put it to the best use possible: building a nuclear-free, carbon-free future.

NIRS on the web (and stay up-to-date with our new Nuclear Newsreel section on the front page, featuring the day's most interesting news on nuclear power and other energy issues): http://www.nirs.org