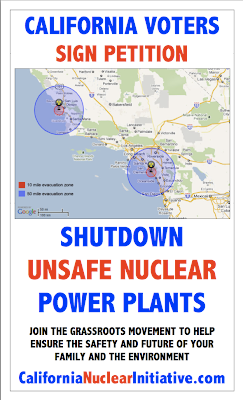 California Nuclear Initiative: On November 18, California’s Secretary of State approved the ballot initiative that seeks the closure of the two remaining nuclear power plants in California, thus starting the countdown for collecting the 504,760 signatures needed by April 7 to place this initiative on the ballot in the presidential election in November 2012.

A nuclear meltdown in Southern California would impact the entire nation. However, if you live within 50 miles of the San Onofre Nuclear Generating Station, you are at higher risk of losing everything you care about here. Five counties are within the 50 mile zone: Los Angeles, Orange, Riverside, San Bernardino and San Diego.

It's time to decommission San Onofre Nuclear Generating Station. It's the only sensible thing to do. It makes economic sense for just about everybody, and spares us the possibility of "Fukushima USA" here in SoCal.

Right now, neither of San Onofre's two reactors are operating. Southern California Edison is already predicting there could be rolling blackouts during the summer if they can't get the reactors running by then. The threat of blackouts is at odds with the historic record of energy usage, which clearly shows that there is more than enough electrical generating capacity and transmission line capacity in SoCal to replace San Onofre

Nevertheless, SoCal residents can EXPECT rolling blackouts -- because SCE wants them to happen: It may cost as much as a billion dollars (or more) to repair San Onofre. Instead SCE could be securing contracts NOW for summer energy use. They could be building a billion dollars' worth of solar rooftops, offshore wind turbines, turbine peaker plants, cogeneration plants, energy storage reservoirs, geothermal energy systems, etc...

...One meltdown at SanO -- or two -- would destroy everything we love about SoCal. Why spend billions of dollars just to restart THAT risk? Right now we just have the spent fuel to deal with -- the radioactive waste pile. It's deadly, difficult to manage, and will cost a fortune. But at least it's NOT GROWING at the moment, and that's good. In fact, slowly but surely, it's cooling and becoming less hazardous.

Email ThisBlogThis!Share to TwitterShare to FacebookShare to Pinterest
Labels: California