Uranium from Africa was, and remains, a major source of fuel for atomic weapons and power plants throughout the world. Uranium for the Hiroshima bomb, for example, came from the Belgian Congo. During any given year of the Cold War, between 20 percent and 50 percent of the Western world’s uranium came from African places: Congo, Niger, South Africa, Gabon, Madagascar, and Namibia. Today, there is a renewed uranium boom throughout the continent. The author writes on the ambiguities of the nuclear state, and the state of being nuclear, and why the nuclear designation matters. She looks at two countries to uncover different dimensions of nuclearity: Niger, which has long struggled with France over the price of its uranium; and Gabon, where cancer and other illnesses related to four decades of uranium production remain invisible. 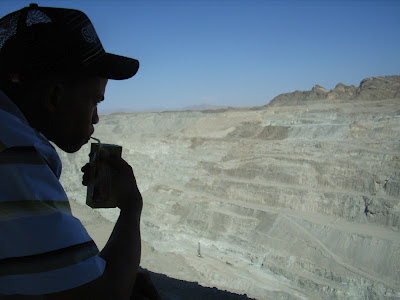 Uranium is not only radioactive but chemically toxic too. 80% of the radioactivity of the original uranium ore is left behind in highly acidic ‘tailings’. It remains radioactive for hundreds-of-thousands of years and should be kept safely isolated from the environment.

Uranium can cause a wide variety of health problems. Miners and local communities drink contaminated water, eat contaminated food and breathe in radon gas and dust from the tailings. In addition to this, the extraction and processing of uranium ore uses huge amounts of highly sought-after water that cannot be recycled.

It has been argued by mining companies that uranium extraction brings jobs to local populations, thus creating better living conditions, and for a few this was true. However the companies also quietly ignore the health and environmental effects of the process.

After 30 years living alongside uranium mines, the Tuareg of Niger refer to uranium as a ‘curse’ rather than a blessing. They say the North of Niger “suffer[s] from its wealth’, rather than reap supposed rich rewards.

In many cases there have been no safety precautions, no radiation protection and no information about the hazards of the mining process. Regulations are non-existent or faulty to such an extent that they would never be accepted in industrialized states...The problems associated with uranium mining are set to continue with its rising price as demand from nuclear power plant companies increases. Africa is especially at risk because companies are attracted by the lack of strict regulations.

When does uranium count as a nuclear substance? When does it lose that status? And what does Africa have to do with it? Such issues lie at the heart of today’s global nuclear order. Or disorder, as the case may be. The questions themselves sound deceptively simple. Understanding their significance and scope requires knowing their history...

The state of being nuclear

more > An elemental force: Uranium production in Africa, and what it means to be nuclear |

The Bulletin of the Atomic Scientists informs the public about threats to the survival and development of humanity from nuclear weapons, climate change, and emerging technologies in the life sciences. The Bulletin was established in 1945 by scientists, engineers, and other experts who had created the atomic bomb as part of the Manhattan Project.

A highly regarded resource written by international scientists and public policy makers, the Bulletin of the Atomic Scientists has been published continually since 1945. It is the official online publication of the organization by the same name, providing analysis, interviews, and policy reviews on reducing nuclear weapons arsenals, controlling fissile materials, providing access to sustainable energy resources, and eliminating the use of harmful technologies in the life sciences. The Bulletin is an important source and forum for experts, policymakers, scholars, journalists, and concerned citizens who prize the ability to make rational policy decisions based on sound scientific information.

"The Bulletin brings substance and clarity to public debates. We need it." Stephen Hawking, Theoretical physicist and member of the Bulletin's Board of Sponsors

This journal is a must-read for:

Access to all of the Nuclear Notebook articles published back to 1999 in each issue of the journal is free!

08/04/2011 - 12:10
Namibia and South Africa are amongst African countries that lack regulatory capacity and technical knowledge to monitor environmental impact and radiation poisoning on workers and communities due to uranium mining.

A study that delved into the environmental impact of uranium mining in Central African Republic (CAR), Namibia and South Africa concluded that mining operations' health consequences on workers and the environment are severe.

While African governments bend over backwards to attract investment in the booming uranium mining sector, investors pay scant attention to mitigating impact on workers, the community and the environment.

Drawing comparisons with Australia and Canada - which have strict laws and monitoring systems - Somo & Wise's study noted that uranium mining requires excellent laws and law enforcement, disciplined, knowledgeable and dedicated governments and institutions backed by a strong civil society to police the activities of mining companies.

In the three countries which the Somo & Wise study centred on, there is uncontrolled pollution, and citizens and workers are not being informed about radiation exposure.

Surrounding communities have little say in mining affairs and in many cases abandoned mining sites are not properly secured.

'Of major concern is the fact that the African governments and institutions all seem to lack knowledge and resources to govern issues that are as hazardous as uranium mining.

'Alarming reports from NGOs in all the African states showed that mitigation of uranium mining impacts is insufficient,' the study reveals.

The researchers allege that pollution is not being managed properly and there is lack of evidence from mining companies that tailing dams will be managed in a way that minimizes environmental damage.