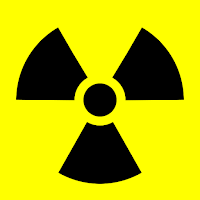 All radiation is dangerous, whether it is natural or man-made. There is no “safe”  amount of radioactive material or radiation. “The U.S. Department of Energy has testified that there is no level of radiation that is so low that it is without health risks”, reports Jacqueline Cabasso, the Executive Director of the Western States Legal Foundation. (full article *)
Why?

“It takes only one radioactive atom, one cell, and one gene to initiate the cancer or cell mutation cycle.” (Helen Caldicott, Nuclear madness: what you can do). Hence, any exposure increases risk of cancer or genetic damage.

As the U.S. Department of Energy says, our current safety “standards now are based on an underlying model called linear-no-threshold (LNT), which maintains that any exposure to radiation may be harmful and extrapolates low dose effects from known high dose effects.”  It continues, “Scientists disagree about the validity of this LNT model.”

But consider this simple, uncontroversial example, unrelated to nuclear power: radon, a naturally occurring gas that emits alpha particles.  In the U.S., radon causes an estimated 20,000 deaths per year, second only to smoking.  But those victims were not exposed to high levels of radon: there was no radon bomb!  Instead, they inhaled and absorbed low doses (indoor average 1.3 picocuries per liter (pCi/L), outdoor 0.4 pCi/L; over 4 pCi/L in Iowa) over years.  (By the way, the EPA also says that radon and smoking are synergistic; it stands to reason that other sources of alpha particles may be synergistic with other carcinogens.)

Here’s another example: children of workers at the Lawrence Livermore Labs get more cancer. “A 1995 California Department of Health Services’ investigation of childhood cancer incidence among Livermore children and young adults (0-24 years), found two and one-half times the expected number of children with malignant melanoma living in Livermore at the time of diagnosis, more than six times the incidence of malignant melanoma in children and young adults born in Livermore, and elevated levels of brain cancer among children born in Livermore in the 1960’s.” (California Department of Health Services. Environmental Health Investigations Branch. Cancer Incidence Among Children and Young Adults in Livermore, California 1960-1991. September 6, 1995.  Cited in announcement of “Community Health Training, Radiation Risk, and the Community“, December 9, 2000, Livermore, California, by Western States Legal Foundation).

Washington’s Blog, even though it is “not against all nuclear power“, has more examples with citations.

Nuclear power plants routinely emit radiation, at levels the government, the NRC and IAEA tell us are safe. These releases are legally permitted and required for the reactors to run; but they are not safe. When investigators of low-dose ionizing radiation revealed that levels of radiation lower than those permitted were causing cancer, government agencies attempted to suppress their findings.  See Industry & the government.

Although much of the evidence has been suppressed, there are studies that demonstrate increased risk in populations that live close to nuclear power plants.

“There have been several epidemiological studies that claim to demonstrate increased risk of various diseases, especially cancers, among people who live near nuclear facilities. Among recent studies, a widely cited 2007 meta-analysis of 17 research papers was published in the European Journal of Cancer Care. It offered evidence of elevated leukemia rates among children living near 136 nuclear facilities in the United Kingdom, Canada, France, United States, Germany, Japan, and Spain. Elevated leukemia rates among children were also found in a 2008 German study that examined residents living near 16 major nuclear power plants in Germany. These recent results are not consistent with many earlier studies that have tended not to show such associations. But no credible alternate explanations for the recent findings have so far emerged.” (Nuclear-News)

We are in the middle of a terrifying scientific experiment in which we and our children are the subjects. Let’s face the facts that mixing the profit motive with the most dangerous technology is a very bad idea, and that natural forces and human error are reason enough to admit nuclear power is a mistake. It’s time to move on.