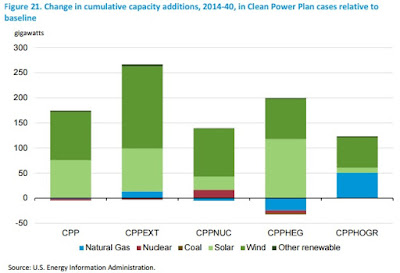 (GreenWorld | June 3, 2015) The Environmental Protection Agency has not yet released the final version of its Clean Power Plan (CPP), but reportedly has sent it to the White House for final review and the public release is expected in August.
But the Department of Energy’s Energy Information Administration (EIA), which typically has vastly underestimated and under-projected the growth of renewables over the years, recently released projections of how much carbon emission reductions the EPA’s Clean Power Plan would produce, based on several different scenarios.