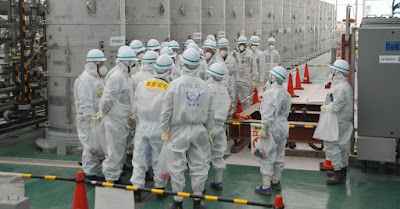 "The IAEA report actively supports the Abe government’s and the global nuclear industry’s agenda to make it appear that things can return to normal after a nuclear disaster."


... In a press statement, Greenpeace Japan seized on the information gap.–


"The IAEA concludes that no discernible health consequences are expected as a result of the Fukushima disaster, but admits important uncertainties in both radiation dose and long-term effects," said Kendra Ulrich, senior global energy campaigner with Greenpeace Japan. "Nobody knows how much radiation citizens were exposed to in the immediate days following the disaster. If you don’t know the doses, then you can’t conclude there won’t be any consequences. To say otherwise is political rhetoric, not science."

The IAEA report conveniently comes as pro-nuclear Prime Minister Shinzo Abe systematically seeks to lift evacuation orders and re-start the country's nuclear program.
"The IAEA report actively supports the Abe government’s and the global nuclear industry’s agenda to make it appear that things can return to normal after a nuclear disaster," Ulrich said. "But there is nothing normal about the lifestyle and exposure rates that the victims are being asked to return to."

In July, Greenpeace Japan charged that the IAEA "has sought to downplay the radiological risks to the population since the early days in 2011. In fact, it produced two documents that can be said to have laid the foundation and justification for Abe’s current policy of de facto forced resettlement."

Exploring the political dynamics further, Ulrich wrote at the time:

Over four years after the triple reactor core meltdowns and exploded containment buildings at the Fukushima Daiichi nuclear power plant, the majority of the Japanese public has remained opposed to any nuclear restart. The country has been completely nuclear-free for nearly two years, thanks in large part to significant public opposition, in spite of the massive pressure from nuclear utilities and the Abe government on local city governments.
However, these utilities are massively powerful and the Abe government is wholly in bed with them.

In an effort to reduce public opposition, Abe has been pushing forward the pro-nuclear agenda to 'normalize' a nuclear disaster. If the public can be convinced that less than five years after the worst nuclear disaster in a generation, citizens can go home and return to life the way it was before the disaster – with no additional health risks – then that is a powerful argument against the majority of Japanese citizens who oppose  nuclear reactor restarts...