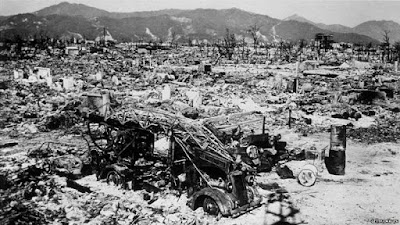 The US has always insisted that the atomic bombs dropped on Hiroshima and Nagasaki were necessary to end World War Two. But it is a narrative that has little emphasis on the terrible human cost.
I met a remarkable young man in Hiroshima the other day. His name is Jamal Maddox and he is a student at Princeton University in America. Jamal had just toured the peace museum and met with an elderly hibakusha, a survivor of the bombing.
Standing near the famous A-Bomb Dome, I asked Jamal whether his visit to Hiroshima had changed the way he views America's use of the atom bomb on the city 70 years ago. He considered the question for a long time...