San Onofre: Why it should NEVER reopen! (The activists speak.)


San Onofre: Why it should NEVER reopen! (The activists speak.)

April 6, 2012 press conference of a coalition of activist groups opposing the re-opening of the San Onofre Nuclear Waste Generating Station. Held just outside the power plant in San Diego County, California. Speakers are Gary Headrick, Gene Stone, Ray Lutz, Patti Davis, Donna Gilmore, Ace Hoffman and Nancy Nolan. Filmed by Ace Hoffman and Adam Salkin. Later in the day, Nuclear Regulatory Commission Chairman Gregory Jaczko held his own press conference, and then met with a small group of citizens, many of whom are in this video, as well as nearly a dozen elected officials from local communities, for about 45 minutes. The photograph at the end is of Gary Headrick and Gregory Jaczko at that meeting. Afterwards, Mr. Jaczko met with our opposition.

special thanks to Ace for the vid! > Ace Hoffman's Nuclear Failures Reports | AceHoffman - YouTube | The Code Killers: An Expose by Ace Hoffman 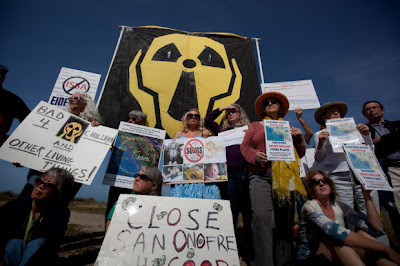 A couple dozen nuclear protesters gathered to call for the closure of the San Onofre Nuclear Plant on April 6, 2012.
The chairman of the federal Nuclear Regulatory Commission toured the San Onofre nuclear power plant Friday with elected officials. He later met with activists who want the plant’s owner, Southern California Edison, to shut it down forever.

The chairman decreed it’ll stay closed until the utility fixes problems with tubes carrying radioactive water. The plant has been offline since January after a tube break sent traces of radiation into the air.

“The NRC wants to get to the bottom of why SONGS is having trouble with relatively new steam generators,” Jaczko said.

He said that Edison will need to know the exact cause or causes for the tube problems at both generator units before it can restart either or both reactors.

The tubes are a primary barrier to prevent radiation from escaping into the atmosphere. That happened anyway at one of the plant’s two units in January.

During his visit, more than 30 anti-nuclear activists rallied about a half mile to the north. They called on the federal regulator to decommission the facility.

"We’re going to insist that they do the proper testing, and not just testing, but we need to verify that the tests are right," said Ray Lutz with Citizens' Oversight Projects. "We want independent verification that we know the root cause of why those generator tubes failed.”

Gary Headrick, founder of San Clemente Green, said safety should be a concern over profits.

He said the groups won't accept "shallow responses" from the NRC or Southern California Edison regarding the state of the station.

Headrick and other anti-nuclear activists had a private meeting scheduled later in afternoon with NRC Chairman Jaczko. Headrick said he planned to ask the chairman for an independent investigation and testing of the faulty tubes.

When asked if the San Onofre plant should restart after those safety issues were fixed, the activists responded in unison: the facility should be shutdown permanently.

Jaczko, speaking at a press conference later in the afternoon, said firm conditions must be met before the NRC allows San Onofre to be restarted and that there was no timeline for restarting the plant. He also said he looked at tsunami protections at the plant during the tour.

"We’ve have a special inspection team here as well," Jaczko said. "We expect to have a public meeting when that is wrapped up and their effort is available, so everyone can see their report.”

Jaczko added that he won't speculate on any potential causes of the tube problems, but that Southern California Edison will have to solve it for themselves before anything gets turned back on.

For now the plant on the San Diego/Orange County border remains offline, and the problem with its tubes remains a mystery.