2012 Rally at San Onofre on Fukushima Day 3/11
Rally Commemorates Chernobyl, TMI, continuing meltdown at Fukushima on Sunday, from Noon to 3pm “Shut Down San Onofre” Momentum builds following Radioactivity Release and Design-Error Shutdown of the Plant April 20, 2012 (SAN ONOFRE) – Nuclear Industry Expert Daniel Hirsch and Irvine City Councilmember Larry Agran will join a dozen other speakers at the “Shut Down San Onofre” rally at the San Onofre Nuclear Generating Station on Sunday, April 29, to support the view that the reactor should never be restarted. The event occurs just after the 26th anniversary of the Chernobyl disaster, the 33-year anniversary of the Three-Mile Island accident, and the first Fukushima Daiichi meltdown anniversary — an accident which is far from over.
more > OB Rag: Rally Against Nuclear Power at San Onofre on April 29th


Down
- A new television ad targeting Southern California Edison calls on residents to let the utility know that their families come first -- and that it must not restart the troubled San Onofre nuclear reactors, which are currently closed due to serious safety problems. 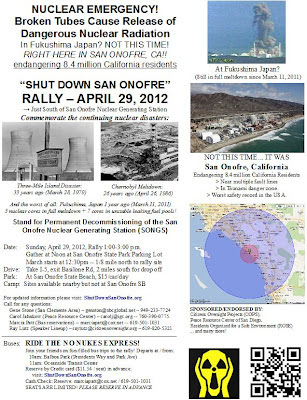 April 6, 2012 press conference of a coalition of activist groups opposing the re-opening of the San Onofre Nuclear Waste Generating Station.


Like billions of people around the world, beginning on March 11, 2011, I struggled to absorb the meaning of the horrific televised images coming from northern Japan. Like others watching from afar, I witnessed the shocking devastation caused by a massive 9.0 earthquake, followed by a 50-foot tsunami. And, like others, I witnessed the unfolding catastrophe at the Fukushima Daiichi nuclear power plant, where the earthquake and tsunami crippled its operations, leading to nuclear reactor meltdowns, major explosions, and the dreaded release of radioactive gases and particles that spread over vast areas of land and sea...

SAN FRANCISCO – The Japanese firm responsible for fabricating the failing steam generators at Southern California Edison’s San Onofre nuclear reactors announced today that it is undertaking analyses of the causes of the serious, unresolved safety problems.

In papers filed with the Nuclear Regulatory Commission, the firm, Mitsubishi Heavy Industries, revealed that its reviews will extend at least through the end of August—ensuring that the troubled reactors will not be able to operate through the summer.

The severity of the problems at San Onofre first came to light when one of the reactor’s steam generators leaked radiation at the end of January. The subsequent discovery of unusual levels of wear in steel tubing in the steam generators of both units has caused both reactors to remain shut down since.

“The people of southern California need answers to what exactly is happening at San Onofre. It doesn’t exactly instil confidence in Edison or the NRC that we have to learn about the process from the Japanese fabricator of the damaged steam generators,” said Damon Moglen of Friends of the Earth. “At the same time, Edison and the NRC must explain why Mitsubishi is planning on doing separate root cause analyses of the two reactors, and on a staggered schedule, when it is clear that the technical problems are shared at the steam generators of both reactors.”

“It’s clear that any plans Edison has for restarting either of the reactors this summer must be abandoned. It’s essential that Edison immediately disclose what plans it has for initiating efficiency and conservation measures for the coming peak energy demand months of summer. Consumers can have safe and reliable energy without relying on these ageing and dangerous nuclear reactors,” said Moglen.

Mitsubishi’s filing with the NRC reveals for the first time that the firm is responsible for conducting an analysis for San Onofre reactor unit 2, which is to be completed by May 31, 2012, and another analysis for reactor unit 3, which is due by August 31, 2012.The company provided no justification for conducting separate analyses despite the fact that the steam generators at both reactors are experiencing the same rapid and unexplained wear which has already lead to the release of radiation during the failure of a steam generator tube at unit 3 in January.

Last week, a study by nuclear engineer Arnie Gundersen and Fairewinds Associates, commissioned by nuclear watchdog Friends of the Earth, provided the first detailed picture of the extent of design changes made by Southern California Edison at its San Onofre nuclear reactors. These changes likely led to the equipment degradation and failure that has forced the reactors offline, pending a thorough and comprehensive investigation.

Edison confirmed last week that the same type of severe wear in the steam generator tubes in San Onofre unit 3 had been found in unit 2.

The FOE commissioned reports on San Onofre are available at: http://libcloud.s3.amazonaws.com/93/86/5/1285/Fairewinds_FOE_Cascading_Steam_Generator_Failures_San_Onofre_2012_4_12.pdf

• whats up: San Onofre: Why it should NEVER reopen! (The activists speak.)