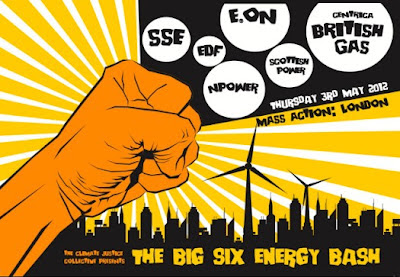 Kick Nuclear, Stop Nuclear Power Network and friends are asking anti-nuclear activists from around the country to mobilise for this and to join them as part of the 'Dirty Energy' bloc at The Big Six Energy Bash in central London on Thursday 3rd May, from 11am, to give EDF Energy and friends a right ole bashin' and expose nuclear power as the false, dirty, dangerous and undemocratic 'solution' to climate change that it is...

On 3rd May, hundreds of protesters from across the country will target the UK Energy Summit in the City of London. They intend to stop the conference from going ahead to "challenge the corporate control of energy." [1]

On the programme for The UK Energy Summit are speaker sessions and debates including CEOs of the Big Six energy companies.[2] The Big Six have recently come under widespread criticism for drawing in record profits whilst one quarter of UK households have been pushed into fuel poverty. [3]

The Summit will see Big Six executives convening with government representatives and high level staff from oil giants BP and Shell. Registration for the summit, organised by The Economist magazine, costs over £1000. The event will take place at The Grange Hotel, near St Paul's Cathedral.

The Climate Justice Collective (CJC) – which says it is a national network tackling corporate control, fuel poverty and climate change – is behind the protest titled 'The Big Six Energy Bash'. Stemming from the colourful and confrontational Climate Camp [4], CJC says it is also close to the Occupy movement.

Billie Blackwood, CJC said: “This conference is a classic 1% stitch up. It is corporate elites, including the government, conspiring to keep the status quo of high energy prices, soaring profits, growing climate instability and disaster capitalism. This conference is the wrong people asking the wrong questions and proposing the wrong solutions...” | [more]