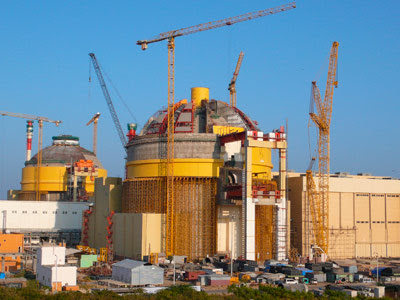 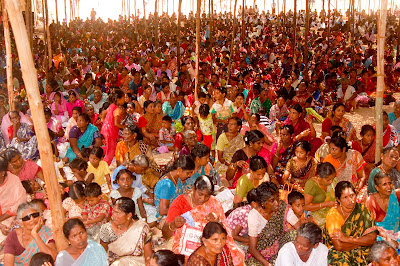 UPDATE 4 MAY 2012: Tirunelveli, Tamil Nadu, May 4 : The ongoing fourth round of indefinite hunger strike against controversial Koodankulam Nuclear Power Project (KKNPP) by the activists of People's Movement Against Nuclear Energy (PMANE), a civil group spearheading the struggle against the nuclear project, gained momentum, with more number of women activists joining the fasting agitation today.

Nearly 500 women from the coastal hamlets around KKNPP joined the fast with 24 activists who were observing the fast-unto-death stir since May 1 last. The anti-nuclear protesters, including women and children, were assembling in large numbers in the protest venue. Talking to newsmen, M Pushparayan, a key activist of PMANE, claimed though more number of women activists were willing to join the fast, they were being prevented and intimidated by the police.

The women from different villages had enrolled their names to participate in the indefinite fast but did not visit the venue due to possible police harassment, he said. "Police have blocked the entrance of the villages and threaten the hired vehicle drivers not to transport people to Idinthakarai village. Even if they dared, police threaten them to cancel their vehicle licenses. So, the drivers are not willing to come to Idinthakarai.

The police have deployed anti-riot vehicles Vajra and Varun at the entrances of the villages," he said. Meanwhile, health condition of the 25 activists who were on fast since May 1, had started deteriorating and their pulse rates were going down. One of the activists, Vinoth was admitted to the hospital today, he added.

Kudankulam Atomic Power Project is a nuclear power station under construction in Koodankulam in the Tirunelveli district of the southern Indian state of Tamil Nadu. Construction has been delayed due to anti-nuclear protests by the locals and People's Movement Against Nuclear Energy.

An Inter-Governmental Agreement on the project was signed on November 20, 1988 by Prime Minister Rajiv Gandhi and Soviet President Mikhail Gorbachev, for the construction of two reactors. The project remained in limbo for a decade due to the political and economic upheaval in Russia after the post-1991 Soviet breakup. There were also objections from the United States, on the grounds that the agreement does not meet the 1992 terms of the Nuclear Suppliers Group (NSG). Construction eventually began in 1997...

In 2008 negotiation on building four additional reactors at the site began. Though the capacity of these reactors has not been declared, it is expected that the capacity of each reactor will be 1000 MW or 1 GW. The new reactors would bring the total capacity of the power plant to 9200 MW or 9.2 GW.

Thousands of protesters, belonging to the vicinity of the plant, have used various means to protest against the plant fearing a Fukushima like disaster. The protesters base their objection on the "more than 1 million people live within the 30 km radius of the KKNPP which far exceeds the AERB (Atomic Energy Regulatory Board) stipulations. It is quite impossible to evacuate this many people quickly and efficiently in case of a nuclear disaster at Koodankulam", etc. According to S P Udayakumar, of the voluntary People's Movement Against Nuclear Energy, "the nuclear plant is unsafe" and "the safety analysis report and the site evaluation study have not been made public. No public hearing was held. It's an authoritarian project that has been imposed on the people." A Public Interest Litigation (PIL) has also been filed against the government’s civil nuclear programme at the apex Supreme Court. The PIL specifically asks for the "staying of all proposed nuclear power plants till satisfactory safety measures and cost-benefit analyses are completed by independent agencies". Protesters said that even advanced countries like Germany have decided to shutdown all its 17 Nuclear reactors through which the country gets 23% of its energy. Gopal Gandhi, grandson of Mohandas Karamchand Gandhi, former West Bengal governor also said that an "Indian Fukushima cannot be ruled out and government needs to convince people about safety aspects of the project."

In March 2012, police said they had arrested nearly 200 anti-nuclear protesters objecting resumption of work of building one of two 1 GW reactors, a day after the local government restarted work on the project.

The People's Movement Against Nuclear Energy is an anti-nuclear power group in Tamil Nadu, India, founded about 2003. The aim of the group is to close the Kudankulam Nuclear Power Plant site and to preserve the largely untouched coastal landscape, as well as educate locals about nuclear power.

S.P. Udayakumar, a Ph.D. in Political Science, is leader of the group. He lives in a village around 30km (18 miles) from the plant site. Udayakumar believes nuclear power benefits only "industrial India", and not the common man. He says the movement has a clear aim: "Our end game is to close down this nuclear power plant. We think that this will have a disastrous impact on our livelihood, on our future generations. Because the Indian government never talks about waste, never talks about decommissioning. It does not tell us the full story."

In March 2012, Udayakumar said: "We have been carrying out hunger strikes, rallies, public meetings, seminars, conferences, and other demonstrations such as shaving our heads, cooking on the street, burning the models of the nuclear plants. This struggle has been going on for the past 197 days and the morale of the people is still very very high". 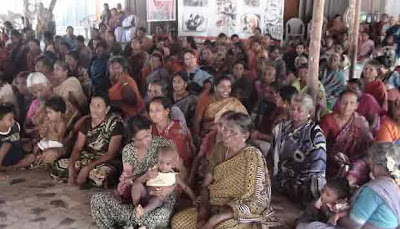 The speed and determination with which the Tamil Nadu government has been slapping its citizens right, left and centre with colonial-era laws, it would seem as if a full-fledged war of independence is raging in the fishing villages of Idinthakarai and Kudankulam along the coast of Tamil Nadu.

According to findings by a team led senior journalist Sam Rajappa, in just four months between September (when the protest movement against the Kudankulam Nuclear Power Plant began to gather momentum) and December 2011, over 6,000 people have been charged under Section 121 (waging war against the government) and Section 124A (sedition) of the Indian Penal Code (IPC) at the Kudankulam police station.

The majority of the cases are against PMANE convenor SP Udayakumar. Firstpost
Commenting on the report Nityanand Jayaraman, a member of the Solidarity Group for Koodankulam Struggle said, “The Kudankulam police station has the dubious distinction, perhaps, of being a station where the largest number of sedition and waging war cases have been filed in the shortest time in the history of colonial and Independent India...”

The Hindu : Cities / Madurai : “A genuine people's movement”
thehindu.com - A five-member fact-finding team of the Chennai Solidarity Group for Kudankulam Struggle has stated in a report that the administration had restricted the movement of essential goods and people... thehindu.com

Don't lose the plot now
thehindu.com - The continuing efforts to criminalise protests against the Kudankulam Nuclear Power Project and portray all opposition to nuclear energy as anti-national must be unequivocally condemned... thehindu.com

Jaitapur, No thank you! — DiaNuke.org

Jaitapur, No thank you!
BATTLEGROUND JAITAPUR

Anny Poursinoff intervened in the French Assembly on 9 February to oppose the deal between France and India on civil nuclear energy and extend support to the people of Jaitapur who refuse the installation by Areva of two EPR power plants in a seismic zone 400 km from Bombay.This text was not supposed to be discussed, but at the request of the Green Party, the opposition was able to impose a debate. The text of the speech is below.

Jaitapur, no thank you!

I thank my colleagues in the opposition who, at our request, made this debate possible.

Indeed, nothing about nukes is trivial. The Court of Auditors recently agreed with the environmentalists on the hidden costs of this industry.

We are now asked to facilitate intellectual exchange on civil nuclear energy between France and India.

In fact, we fear that the agreement is linked to the installation by Areva of EPR nuclear power plants in Jaitapur, an area rich in biodiversity and a seismic zone, 400 kilometers from Bombay, the Indian economic metropolis.

A few days before the anniversary of Fukushima, after the report of the Nuclear Safety Authority showing that power plants are not infallible, our Indian friends themselves have doubts: they asked Areva to strengthen the security of computer systems.

But the EPR is particularly dangerous. It produces plutonium and uses MOX, whose radioactivity is 5 to 7 times superior to that of uranium fuel.

Through this agreement, we are asked therefore to take the risk of a new Fukushima and another Hiroshima.

No, I’m not exaggerating.

You know it, India and Pakistan have developed nuclear weapons. These two rivals have not signed the Nuclear Nonproliferation Treaty.

You also know that France is selling weapons to both countries – let us remember the case of Karachi or the recent sale of over a hundred fighter jets to India.

The agreement on intellectual property could open the door to the transfer of technology which could be used for military purposes, whether uranium processing and enrichment or plutonium production .

Yet, the Nuclear Suppliers Group, last June, banned the export of sensitive equipments to countries that have not signed the nonproliferation treaty.
So we are asked to take the risk of breaking international laws.

The French government is ready to do anything to sell plants!

I say here solemnly: I hope that negotiations with India on nuclear power will fail.

Democracy requires it: the local population is opposed to the installation of Areva power plants. A protester has already paid with his life!

Scientific and economic reasons require it as well.

Why offer our Indian friends such a poisoned gift?

Our cooperation should be around peaceful activities such as the fight against global warming, instead of focusing on the energies of death, arms sales and nukes!

“We must safeguard the jobs created by Areva!”, my pro-nuclear colleagues will say.

But technology transfers, whose patents India does not recognize, does nothing to protect employees of the French nuclear sector. The Indians have excellent scientists and excellent engineers!

As for the excuse of economic development, it does not stand. Local people do not get the jobs generated by nukes, studies in Tamil Nadu have shown.

The people of Jaitapur understood it: they refuse to be expropriated, they do not want these plants.

I’ll try to say it in Hindi: Jaitapur, ji nahi!

Jaitapur no thank you!

The French government showed a criminal bad faith. On the one hand it proclaims that there is no risk with nuclear power, on the other it pressurizes its Indian counterparts to change their legislation.

Indian provisions state that the manufacturer is responsible in case of disaster.
After Bhopal, we understand the wisdom of the Indian government vis-à-vis unscrupulous Western industrial partners.

Now the President of the French Republic himself asked the Indian Prime Minister of India to relax the law. Why? Because Areva does not want to be liable for a nuclear accident in Jaitapur?

Neither do we, we do not want to bear this responsibility.

But the best way to avoid another Fukushima is to give up the building these plants, which are located, I repeat, in a seismic zone … like Fessenheim!

French environmentalists have expressed their solidarity with the protests of Indian civil society.

I request you, dear colleagues, to do the same, and to vote against this text.

In France as in India, future generations must be protected from disasters and nuclear waste.

DIALOGUES and RESOURCES on Nuclear, Nature and Society — DiaNuke.org