Devil's Tango: How I Learned the Fukushima Step by Step by Cecile Pineda 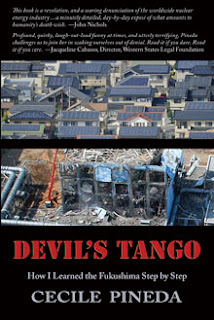 Published on the one-year anniversary of the disaster at Japan's Fukushima Daiichi nuclear plant, Devil's Tango is a one-woman whirlwind tour of the nuclear industry, seen through the lens of the industrial and planetary crisis unfolding most visibly right now in Japan. As much personal journal as investigative journalism, the author's journal entries trace her own and the world's evolution of consciousness during the first year following the March 11, 2011 disaster. Pineda keeps track, day-by-day, of worsening developments at Fukushima Daiichi, and records the daily evolution of her perceptions. Often poetic in tone, philosophic in scope, her reflections are peppered with dramatic monologues,day-to-day reportage, philosophical speculations, meditations, deep song (canto hondo) and occasional flights of fancy, a monoplay, and a grand guignol. There is no other book quite like it. John Nichols calls it an "astonishing anatomy of the Fukushima Daiichi nuclear disaster," "... a revelation, and a searing denunciation of the worldwide nuclear energy industry."

From the Foreword by Jacqueline Cabasso

Sixty-seven years into the nuclear age, we are all Fukushima now: Hiroshima, Nagasaki, Bikini, Three-Mile Island, Chernobyl, uranium mining, depleted uranium, cancers, leukemias, extreme birth defects, and the list goes on&. How has the human race backed itself into this radioactive End Game, and what can be done to keep the earth from becoming a designated exclusion zone? Told in the first person, Devil's Tango: How I Learned the Fukushima Step by Step is an extraordinary and fearless slice through the meaning of life--and death--from the very personal to the very global. The unfolding Fukushima nuclear disaster, exhaustively researched, serves as a day-to-day benchmark, calling into question the very future of our mother planet. Profound, quirky, laugh-out-loud funny at times, and utterly terrifying, the author challenges us to join her in waking ourselves out of denial, in learning to see the connections that link the tiniest fish scale and the smallest grain of sand with the corrupt juggernaut of the corporate, international terror state, and in acting on our consciences. It's up to us to save ourselves. Change, the author concludes, won't come from governments or the halls of power. It will come from the "99 percent" and from activists and local people around the world in a life-and-death, decades-long struggle for the sanctity of life. Devil's Tango tells an amazing story. Read it if you dare. Read it if you care.

more > Devil's Tango: How I Learned the Fukushima Step by Step by Cecile Pineda , Published by Wings Press

Email ThisBlogThis!Share to TwitterShare to FacebookShare to Pinterest
Labels: Fukushima