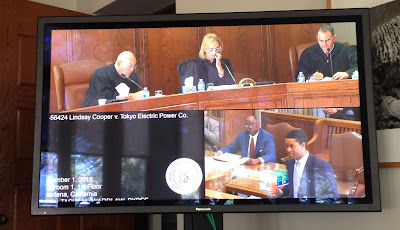 On September 1, 2016, Nuclear Hotseat Producer/Host Libbe HaLevy attended the US 9th District Court Hearing on USS Reagan Sailors v. Tokyo Electric Power Company.  The sailors were on an humanitarian aid mission to Japan following the 2011 Tohoku earthquake and tsunami, which caused the Fukushima Daiichi triple meltdowns.  TEPCO never informed the US Navy of the dangerous release of radioactivity from the crippled nuclear reactors and as a result, the sailors were exposed to catastrophic levels of radiation.  At stake in this hearing: the right for the already ill sailors to have their case heard in U.S. court, not Japan.*


(NOTE:  The ruling handed own just this week will allow the case to proceed in the United States court system.  This program lets you glimpse what it took to get here.)

Hear excepts from the testimony and exclusive interviews with: