6/11 SF Japan Consulate Speak-out :: Do Not Force The Families of Fukushima Back and Stop The Restarting of Japanese Nuclear Plants | No Nukes Action Committee 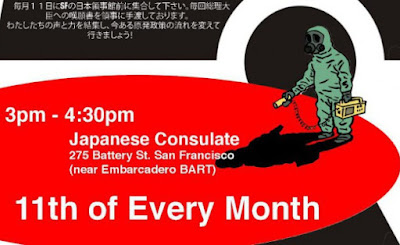 The people of Fukushima and Japan continued to be threatened by the ongoing contamination of Fukushima and the Abe government restarting of nuclear plants. The government continues to pressure Fukushima families and their children to return to Fukushima or lose their subsidies. These government demands is harming the health and mental conditions of the Fukushima refugees who do not want to return. The government which now controls Tokyo Electric Power Company continues to use thousands of contract workers to supposedly decontaminate the plant and the thousands of acres surrounding the plant. These workers do not have proper health and safety protection and the government uses the Yakuza to recruit day laborers and workers from other countries. They are also demanding that other prefectures or states “recycle” 16 million cubic meters of contaminated radioactive soil in construction projects throughout the country despite the danger of expanding the contamination of the entire population…

more: 6/11 SF Japan Consulate Speak-Do Not Force The Families of Fukushima Back and Stop The Restarting of Japanese Nuclear Plants | No Nukes Action Committee