Nuclear Weapons Ban? What Needs to be Banned Is U.S. Arrogance | Counterpunch 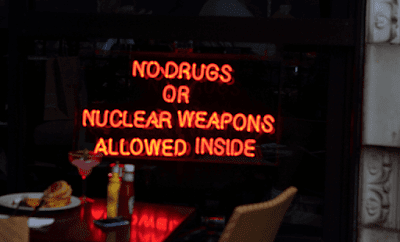 In a context of almost total indifference, marked by outright hostility, representatives of over a hundred of the world’s least powerful countries are currently opening another three-week session of United Nations talks aimed at achieving a legally binding ban on nuclear weapons.  Very few people even know this is happening.

Let’s talk about Russian hacking instead, or the rights of trans-sexuals to use the toilet of their choice, or even about something really important: climate change.

But wait a minute. The damage to human society, and to “the planet”, from the projected rise of a few degrees of global temperature, while commonly described as apocalyptic, would be minor compared to the results of all-out nuclear war.  More to the point, the degree of human responsibility in climate change is more disputed among serious scientists than the public is aware, due to the role of such contributing factors as solar variations.  But the degree of human responsibility for nuclear weapons is unquestionably total.  The nuclear war peril is manmade, and some of the men who made it can even be named, such as James Byrnes, Harry Truman and General Lester Groves.  The United States government consciously and deliberately created this danger to human life on earth. Faced with the United States’ demonstrated capacity and moral readiness to wipe out whole cities with their devices, other countries built their own deadly devices as deterrents.  Those deterrents have never been used, which lulls the public into believing the danger is past.

But the United States, the only power already guilty of nuclear manslaughter, continues to perfect its nuclear arsenal and to proclaim its “right” to launch a “first strike” whenever it chooses.


more: Nuclear Weapons Ban? What Needs to be Banned Is U.S. Arrogance