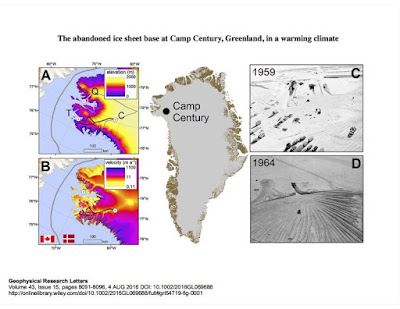 In 75 years, Camp Century could literally melt down.


Over the last century, many glaciers have pulled back farther than humans have ever previously witnessed. While the retreat of glaciers, and changes in the cryosphere more generally (which includes ice sheets and permafrost), can be seen as purely symbolic representations of the unwavering march of climate change, they are shifting geography as they melt and thaw, leaving dangerous implications behind.

Camp Century is only one such instance. Built underneath the surface of the Greenland Ice Sheet in 1959 by the the US Army Corps of Engineers as part of Project Iceworm, the project was designed to create a network of mobile nuclear missile launch sites in Greenland. Intended to study the deployment and potential launch of ballistic missiles within the ice sheet, the base was eventually abandoned and decommissioned in 1967.