17 JUNE :: WOMEN'S MARCH AND RALLY TO BAN THE BOMB 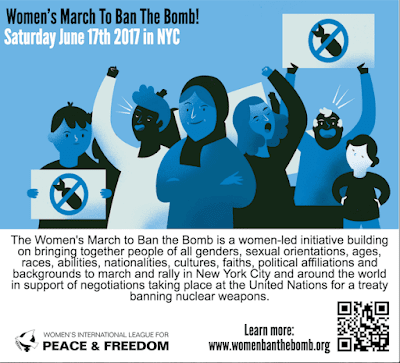 
NUCLEAR WEAPONS ARE ABOUT TO BE BANNED AND WE NEED YOUR VOICE!


In one of its final acts of 2016, the United Nations General Assembly adopted with overwhelming support a landmark resolution to begin negotiations on a treaty prohibiting nuclear weapons. This historic decision heralds an end to two decades of paralysis in multilateral nuclear disarmament efforts.
Throughout June and July of 2017, governments will negotiate a ban on nuclear weapons at the United Nations. WILPF and our coalition are hitting the streets to celebrate and also demand a good treaty that prohibits these weapons of mass destruction once and for all!
The Women’s March to Ban the Bomb is a women-led initiative building on the momentum of movements at the forefront of the resistance, including the Women’s March on Washington. It will bring together people of all genders, sexual orientations, ages, races, abilities, nationalities, cultures, faiths, political affiliations and backgrounds to march and rally at 12 PM – 4PM Saturday, June 17th 2017 in New York City!

more info: Nuclear weapons are about to be banned and we need your voice! - Women's March and Rally to Ban the Bomb