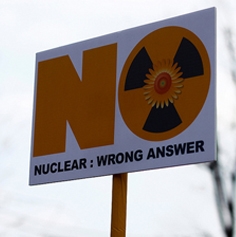 When nuclear power started to develop into an ever more important source of electric energy during the second half of the twentieth century, there grew widespread optimism regarding the potential of this seemingly unlimited, clean and, in the long run, economic resource. The unresolved problem of how to dispose of nuclear waste—which degrades very slowly, with a half-life of up to 15.7 million years—existed from the beginning but was widely ignored. Instead, much hope was placed in finding a solution to this problem—a solution that, up to this date, still does not exist.
Those who were skeptical of nuclear power were proven right by the accidents of Three Mile Island in 1979, Chernobyl in 1986, and Fukushima in 2011. The latter two incidents in particular encouraged demands for a nuclear power phase-out and led to the establishment of phase-out plans in several countries, including Germany. When the urgency of climate change, along with the necessity of rapid decarbonization, became more evident, many scientists and activists alike pleaded for the use of nuclear power as a transitional technology. They argued that the use of nuclear power could help to avoid shortages in energy supplies caused by the relative unreliability of renewables like wind and solar energy.
In this important new study, Tim Judson, Executive Director of the Nuclear Information and Resource Service (NIRS) and renowned nuclear power expert, does away with persistent myths about the importance of nuclear power. Starting not from an abstract position but by considering real-world events, the author demonstrates the very concrete challenges that the production of nuclear power poses for the environment as well as for our economy.
In addition to the long-lasting environmental impacts of nuclear power production, Judson pays attention to how it affects communities—and in particular poor communities of color—through the mining and processing of uranium as well as the disposal of nuclear waste. While mainly focusing on the production and use of nuclear power in the US, as well as possible phase-out scenarios, this study can easily be applied to other contexts around the world. Informed by global trends in climate change, this study is of utmost urgency in showing us a path toward a nuclear-free, sustainable future.
Rosa Luxemburg Stiftung—New York Office introduces this study as an opportunity to carefully investigate the possible potential as well as the dangers of nuclear power, and the question of its suitability as a transitional technology.