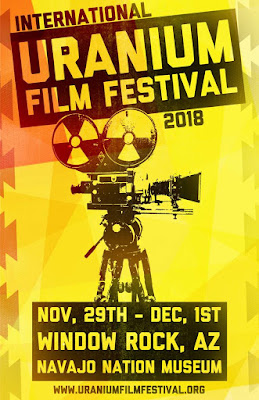 www.uraniumfilmfestival.org ::: The issue of nuclear power is not only an issue of the Navajo Nation, who suffered for decades because of uranium mining. All people should be informed about the risks of uranium, nuclear weapons and the whole nuclear fuel chain, states International Uranium Film Festival’s Director Norbert G. Suchanek. In an effort to keep people informed and aware, particularly during this critical time of escalating nuclear threats, the International Uranium Film Festival returns to the U.S. Southwest in 2018.

The schedule for the U.S. Southwest tour of the 2018 International Uranium Film Festival is as follows:

We are currently selecting the films which will comprise the International Uranium Film Festival. We encourage especially Native American and women filmmakers to send their films about uranium mining or any nuclear issue to the Festival. The selected films will be shown not only in the Navajo Nation Museum but also in venues in Flagstaff, Albuquerque, Grants, Santa Fe and Tuscon. The best productions will receive the Uranium Film Festival´s award in Window Rock.
We extend our most sincere gratitude to the Levinson Foundation for their support, making this Festival possible. Festival partners and co-organizers of the Uranium Film Festival in the American Southwest are the New Mexico Social Justice and Equity Institute, the SW Indigenous Uranium Forum and the Multicultural Alliance for a Safe Environment (MASE).
See here the first selected films.