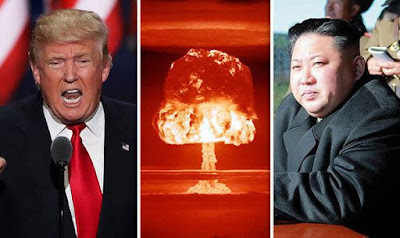 Tell Senators Schumer and Gillibrand:
NO WAR WITH NORTH KOREA
NO MORE WAR
NO MORE NUCLEAR WEAPONS
TAKES NUKES AWAY FROM TRUMP

Pyongyang revoked its threat against Guam - and said it would wait to see what the United States would do! We cannot risk the safety of our allies, troops abroad, Guam residents, North Korean families and U.S. citizens because this Administration refuses to even acknowledge that there are diplomatic solutions on the table.

A proposal on the table to avert war and start talks is “freeze for freeze” in which North Korea suspends its nuclear and missile testing in exchange for halting or scaling back massive US-South Korean military exercises. A growing number of American officials are calling for this “freeze for freeze,” which has also been proposed by North Korea, China and Russia.

In an August 14, 2017 poll, 76% of Americans said they want diplomacy to resolve the North Korean nuclear crisis. We call for an end to dangerous brinkmanship and the start of talks!

1.) Stop reckless brinkmanship; Start Talks Now! Suspend US-ROK military rehearsals for war in exchange for North Korea’s halting of nuclear and missile testing.
2.) De-escalate tensions and build mutual trust by reuniting Korean Americans with their families in North Korea, and repatriating the remains of US servicemen still in North Korea.
3.) Start the peace process towards signing a peace treaty to formally end the Korean War.
4.) Senators Schumer and Gillibrand must support SJR 200 for a U.S. No First Strike Policy and take these weapons AWAY from the impulsive actions of 45!