(27 APRIL 2017) The Trump administration & Congress are renewing the threat to turn sacred Yucca Mountain, located on Western Shoshone Lands near Las Vegas, Nevada, into a massive nuclear waste dump.
Yesterday, on the 31st anniversary of the Chernobyl nuclear disaster, the House Committee on Energy and Commerce held a hearing in Washington, DC to initiate the legislative process.
Congress is considering amendments to the Nuclear Waste Policy Amendments Act that would restart  operations that began in 1982.   If the Yucca Mountain project is allowed to proceed, it would mean transport of highly radioactive waste from throughout the country’s nuclear power plants to this site. More than 70,000 tons of spent nuclear fuel and high-level waste would be dumped inside the sacred mountain… 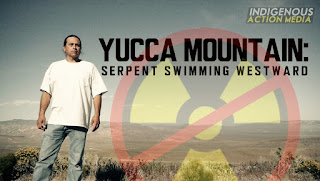 Yucca Mountain is located on Western Shoshone land. The NCAC has also legally challenged U.S. federal ownership of the site as a violation of the 1863 Treaty of Ruby Valley.