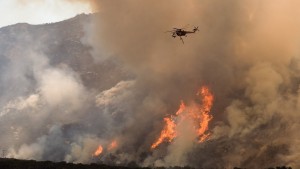 Wildfires that broke out in a mountain forest near the crippled Fukushima nuclear power plant last weekend are causing worries that radiation from the 2011 disaster might be spread with the smoke, dust and flames.
Eight helicopters from Fukushima, Miyagi and Gunma prefectures were dispatched to Mount Juman in Naime in the north east of the country, where radiation levels have remained high since the Fukushima plant experienced a triple meltdown in the worst nuclear disaster since Chernobyl in 1986.
When these helicopters couldn’t stop the blaze, said the Manichi, local officials summoned help from the Ground Self-Defense Force, a branch of the Japanese military.
The fire was apparently started by lighting in the abandoned area, which the Japanese government has designated as a “difficult-to-return” zone, meaning that evacuees of the initial disaster have not returned home due to persistently high radiation measurements.
The dangers arising from the fires in the irradiated area are similar to those that Russia and Ukraine combated when wildfires ripped through areas surrounding Chernobyl and the Mayak Chemical Combine during a drought-racked summer in 2010.
Fires around nuclear accident sites can spread radionuclides like cesium-137, strontium-90 and plutonium that can travel with the wind, posing a risk of internal exposure to anyone who might inhale them, said Anton Beneslavsky, a firefighter who worked to extinguish the blazes near Chernobyl, according to the International Business Times.
“This is a health concern because when these unstable atoms are inhaled, people become internally exposed to radiation,” he wrote in a blog post for Greenpeace Russia…