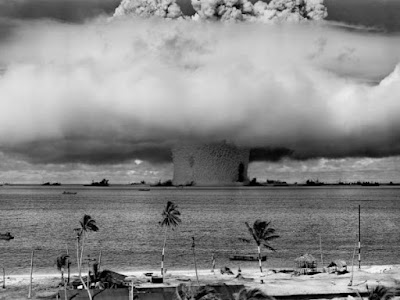 SAN FRANCISCO — An attorney for the Marshall Islands told a skeptical Ninth Circuit panel this week that the federal government must comply with its international treaty obligations to eliminate nuclear weapons around the world.
Though the appellate panel did not indicate at the Wednesday hearing how it would rule, it pummeled counsel for the Marshall Islands while lobbing softball questions to a Department of Justice attorney.
The Republic of the Marshall Islands sued the United States and eight other nuclear-armed nations in April 2014, accusing them of violating the 1968 Treaty on the Nonproliferation of Nuclear Weapons by failing to dismantle their nuclear arsenals.
The treaty prevents non-nuclear nations from acquiring nuclear weapons, and requires nations with nuclear arms to negotiate their elimination...

more: Ninth Circuit Hesitant to Get Into Nuclear Disarmament