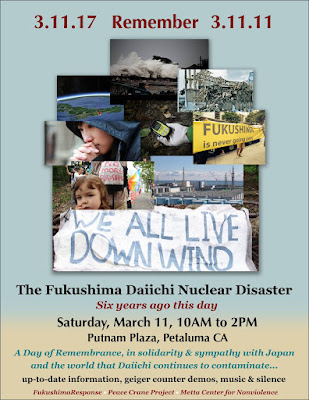 FOR IMMEDIATE RELEASE
FUKUSHIMA RESPONSE Media Contact: Linda Speel 707-765-0196
Remember 3.11.11 – the 6th Anniversary of the Fukushima Nuclear Disaster
A Day of Remembrance in Solidarity & Sympathy for Japan
(Petaluma 2/22/17) Sonoma County residents are invited to a FREE public event on Saturday, March 11, 2017, to commemorate the Fukushima Daiichi Nuclear Power Plant disaster that occurred a few days after the great earthquake and tsunami that devastated northeastern Japan on March 11, 2011. “Remember 3.11.11” is a reflective and informed event sponsored by three socially engaged local groups: FukushimaResponse, Peace Crane Project, and Metta Center for Nonviolence.
The members of these groups will gather in Putnam Plaza, 129 Petaluma Blvd. N. in Petaluma, California, at 10:00am and will remain available until 2:00pm to answer questions about the history, current status and future implications of this ongoing nuclear disaster. There will be geiger counter demonstrations, origami making, guided meditation, and music. At the top of each hour, three minutes and eleven seconds of silence will be observed for all the victims, past and future, of this monumental ecological tragedy.
Numerous other efforts to remember the Sixth anniversary of the Fukushima Daiichi nuclear accident in Japan are being organized globally; for example, in London, Berlin, Spain, Colombia, Australia. With all the troubling news and cause for great concern in our world right now, there persists an international network of people who know and care deeply about what this particular nuclear catastrophe means. This Petaluma event is part of an international response.
John Bertucci of FukushimaResponse described his thoughts for this day, “Given that there are 450 other operating Nuclear Power Plants (NPPs) sprinkled across the globe that could easily become similar catastrophes, it is important that we recognize and understand the risks and potential impacts of the radioactive contamination they would release into our communities and ecosystems. You could say Japan is teaching us how to respond; unfortunately, especially for the people of Japan, it’s been more a lesson in how not to.”
FukushimaResponse has organized or participated in memorial events for all five preceding Fukushima anniversaries, and in October of 2013 assembled 500 people for the “Fukushima is Here” human mural on Ocean Beach in San Francisco. Last year, Peace Crane Project organized a “Nuclear Remembrance Day” in Putnam Plaza on the August 6th anniversary of the Hiroshima bombing. Metta Center for Nonviolence is an internationally known organization based in Petaluma, dedicated to helping people find their way to live in peace and harmony.
The public is enthusiastically invited to join in this important annual event to commemorate the Sixth Year Anniversary of the Fukushima Daiichi Nuclear Power Plant (NPP) disaster. An exceptional opportunity to manifest our continued concern and compassion for those who lived nearby and have lost their homes, their livelihood, their health – as well as to think about all of us on the planet that the Daiichi disaster continues to contaminate.
“Remember 3.11.11 – the 6th Anniversary of the Fukushima Nuclear Disaster” begins at 10:00am on Saturday, March 11, 2017 in Putnam Plaza, 129 Petaluma Blvd. N., Petaluma, California. This FREE event is sponsored by: FukushimaResponse, FukushimaResponse.org — Peace Crane Project, https:// peacecraneproject.org/ — Metta Center for Nonviolence, http://mettacenter.org/ — Peaceroots Alliance, http:// peaceroots.org — Shakuhachi flute music provided by Elliot Kallen.
For more information & interviews contact: Linda Speel 707-765-0196
Link to recent article by Robert Hunziker on the current situation in Fukushima:
http://www.counterpunch.org/2017/02/20/fukushima-a-lurking-global-catastrophe/