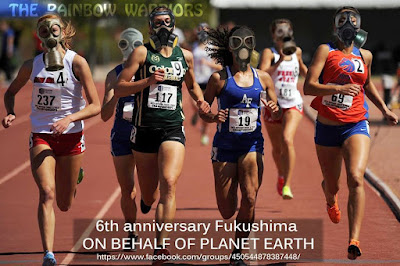 – On Monday, March 6, at 8:15AM-9:15AM, ON BEHALF OF PLANET EARTH will be vigiling, leafletting and holding signs at the Japanese Consulate/Boston, 200 Atlantic Avenue at South Station in front of the Federal Reserve Bank Bldg. [This is Dewey Square, where occupyboston was]. We will be wearing our pink slips to fire Entergy and a haz mat suit and athlete sportswear. From there we will walk together to the MA State House and do same and then walk through State House and visit some of our lawmakers. From there, either on Mon or Tues we will do same at John F Kennedy Federal Bldg.

Our witness is to remember the 6th anniversary of Fukushima, March 11, 2017, still pouring its radioactive water into all our oceans, our one ocean, these six years.

We wlll also tell them all, yet again, that Fukushima=Pilgrim, are same GE model Mark 1, boiling water reactor BWR


MOVE FUKUSHIMA/TOKYO/JAPAN/TEPCO 2020 OLYMPICS AWAY FROM FUKUSHIMA NUCLEAR RADIATION AND OUT OF JAPAN.


KEEP OUR WORLD ATHLETES OUT OF HARM'S WAY