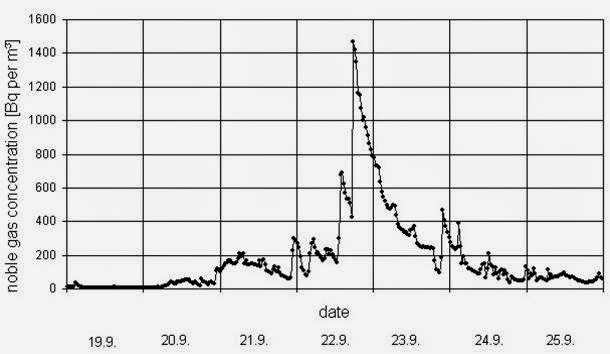 Radiation spike caused by refueling at one of Bavaria’s Gundremmingen reactors.


Last July, we published a piece on recent groundbreaking work from the U.K.’s Dr. Ian Fairlie and the connection between radiation releases from nuclear reactors and childhood leukemia.
We quoted Dr. Fairlie:

“The core issue is that, world-wide, over 60 epidemiological studies have examined cancer incidences in children near nuclear power plants (NPPs): most (>70%) indicate leukemia increases. I can think of no other area of toxicology (eg asbestos, lead, smoking) with so many studies, and with such clear associations as those between NPPs and child leukemias. Yet many nuclear governments and the nuclear industry refute these findings and continue to resist their implications. It’s similar to the situations with cigarette smoking in the 1960s and with man-made global warming nowadays.”

Today, Ian (full disclosure: an old friend and valued colleague) stopped by NIRS’ office to go over a presentation he made Monday to officials at the U.S. Environmental Protection Agency. The presentation is available in both Powerpoint and pdf format on NIRS’ website.
The presentation went over much the same ground as our earlier piece, but it’s often the background behind such a presentation that is the most interesting and revealing. And that’s the case here too.
Dr. Fairlie’s thesis is that childhood leukemia is caused by radiation exposure. Period.The data from several fairly recent European governmental studies show elevated childhood leukemia rates within five kilometers (three miles) of nuclear reactors. Past five kilometers, the elevated rates drop off to normal rates...
more: The evidence that radiation from nuclear reactors causes childhood leukemia | GreenWorld