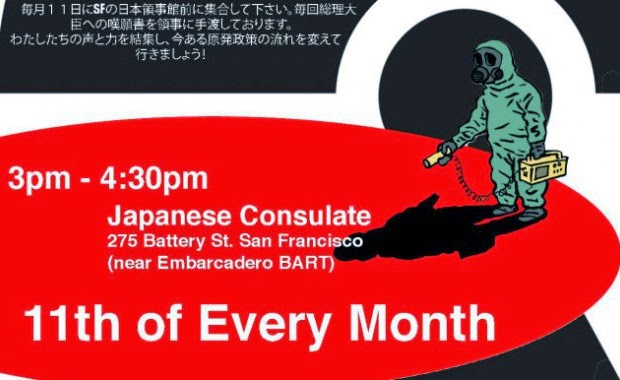 Activists and people of Northern California  working to defend the families and children of Fukushima and those opposed to the continued release of radioactive water from the Fukushima plant will be rallying and speak out at the Japanese consulate in San Francisco. The Abe government continues the effort to restart Japan’s remaining plants which number over 40 and are on earthquake fault lines. Even the former Prime Minister Koizumi is shocked by the false statements by current Prime Minister Abe.
The government also continues to argue that people can overcome radiation and that the Fukushima plant area can be decontaminated. There is a growing rise in cancer thyroid cases  particularly among children.
The government has also passed a secrecy law that will prevent people in Japan and around the world from getting information about the affects of the continuing nuclear environmental and human crisis.
The monthly event is sponsored by
No Nukes Action Committee
https://nonukesaction.wordpress.com
For more information contact
(510) 495-5952
Fukushima Residents Sue Japan Government Over Plans To Push Them Back On Contaminated Land
http://ajw.asahi.com/article/0311disaster/fukushima/AJ201504010062
Fukushima residents suing government for lifting evacuation advisories
April 01, 2015
By MASAKAZU HONDA/ Staff Writer
MINAMI-SOMA, Fukushima Prefecture–Hundreds of residents here plan to sue the central government for lifting evacuation advisories near the crippled Fukushima nuclear plant, saying the decision endangered their lives because radiation levels remained high around their homes.
In the lawsuit that will be filed with the Tokyo District Court, the 535 plaintiffs from 132 households in the city just north of the nuclear plant will demand that the government retract its decision to lift the advisories and pay 100,000 yen ($837) in compensation to each plaintiff.
According to the plaintiffs, the government’s cancellation of the advisories goes against the Law on Special Measures Concerning Nuclear Emergency Preparedness, which states that its purpose is to “protect the lives, bodies and properties of citizens from a nuclear disaster.”
After the crisis started at the Fukushima No. 1 nuclear power plant in March 2011, the government issued evacuation orders for areas within 20 kilometers of the plant. The plaintiffs’ homes are in areas that were issued evacuation advisories and surrounding neighborhoods.
During the decontamination process for areas around the plant, the government initially wanted to lower annual radiation exposure doses to 1 millisievert. After that goal proved impossible, the target became 20 millisieverts.
“The government has selfishly raised the limit on annual public radiation exposure from 1 millisievert set before the nuclear crisis to 20 millisieverts, having residents return to their homes still exposed to high doses of radiation,” said Kenji Fukuda, an attorney representing the plaintiffs. “This is an illegal act that violates the residents’ right to a healthy environment guaranteed by the Constitution and international human rights laws.”
A public relations official at the government’s nuclear disaster response headquarters denied the government had put residents in danger.
“Annual radiation exposure levels in all areas that were previously issued the advisories have fallen below 20 millisieverts following decontamination procedures,” the official said. “With the radiation levels unlikely to have a significant effect on the residents’ health, we have called off the advisories by going through legal procedures.”
The government issued the advisories to households starting in June 2011, urging pregnant women and children in particular to evacuate their homes.
The advisories, issued to 281 households in Fukushima Prefecture, were all lifted by the end of last year. But many of the 152 households that were issued advisories in Minami-Soma opposed the government’s decision.
“The woodlands and farmlands of the surrounding areas are still contaminated, leaving many of the radiation levels unreduced,” said Shuichi Kanno, the 74-year-old chief of a ward in Minami-Soma who heads the plaintiffs. “Radiation levels have even increased in some areas. There is no way our children and grandchildren will be returning to their homes like this.”
By MASAKAZU HONDA/ Staff Writer
Japan Former PM Koizumi Shocked By The Lies Of Japan PM Abe On Fukushima  & Nuclear Dangers
http://ajw.asahi.com/article/0311disaster/fukushima/AJ201503120038
Koizumi blasts Abe’s nuclear policy, remark about Fukushima crisis
March 12, 2015
By SHINICHI SEKINE/ Staff Writer
KITAKATA, Fukushima Prefecture–Former Prime Minister Junichiro Koizumi said he was “dumbfounded” by his protege’s push to restart nuclear reactors and his claim that the situation at the crippled Fukushima No. 1 nuclear plant was “under control.”
In his strongest tone so far, Koizumi repeated his anti-nuclear arguments at a lecture here on March 11, the fourth anniversary of the Great East Japan Earthquake and tsunami that led to the meltdowns at the Fukushima power plant.
Persistent leaks and the accumulation of radioactive water at the nuclear plant have long hampered efforts to decommission the reactors there.
But in front of an international audience in September 2013, during the final presentation in Tokyo’s bid to host the 2020 Olympics, Prime Minister Shinzo Abe said the water problem was “under control.”
“It is not under control at all,” Koizumi said of Abe’s comment. “I cannot believe he could ever say something like that.”
Koizumi also questioned the rationale behind the Abe government’s plans to restart reactors whose operations were suspended after the 2011 disaster.
“The chairman of the Nuclear Regulation Authority has said that even if nuclear power plants meet the NRA’s new regulation standards, that itself does not guarantee their safety,” the former prime minister said.
He added that nuclear power is the “least cost-effective method of power generation.”
Koizumi also criticized the government’s plan to unilaterally select the location for the final repository of spent nuclear fuel, which has been piling up at nuclear plants around the nation.
“It is irresponsible for the government to make the decision and force other parties to obey it when the resumption of idled nuclear power plants is set to produce even more spent fuel,” he said.
Koizumi said a political decision is needed to end the nation’s dependence on nuclear energy.
“If the government shifts to a policy of having no nuclear power plants, then the nation can see economic growth through natural sources of energy,” he said.
By SHINICHI SEKINE/ Staff Writer

Email ThisBlogThis!Share to TwitterShare to FacebookShare to Pinterest
Labels: Olympics 2020