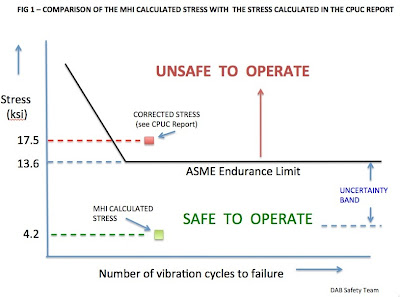 Provided to the “DAB Safety Team” as additional explanation of the fatigue damage to SONGS steam generators which was discussed in a report by the author and was submitted to the California Public Utility Commission on March 29, 2013

SCE/MHI made a mistake in their stress analysis, which directly impacts the safety of restarting Unit 2.  When the error is corrected, the result clearly shows that Unit 2 has already used up its allowed fatigue life and is not fit for service any longer.  This means that if Unit 2 is restarted at any power level an abrupt pressure change such as inadvertent closing or opening of a valve or a steam line break could lead to a sudden tube ruptures.   The ASME code and NRC regulations do not permit safety components to operate when their fatigue life has been exhausted


more: Why fatigue damage will stop the NRC from allowing Unit 2 to restart | Decommission San Onofre