Ex-Regulator Says Nuclear Reactors in US Are Flawed 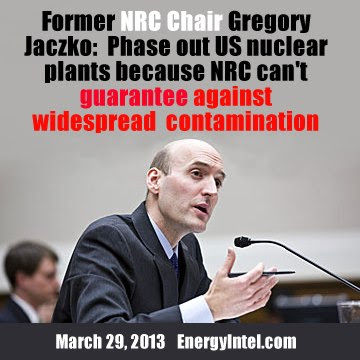 WASHINGTON — All 104 nuclear power reactors now in operation in the United States have a safety problem that cannot be fixed and they should be replaced with newer technology, the former chairman of the Nuclear Regulatory Commission said on Monday. Shutting them all down at once is not practical, he said, but he supports phasing them out rather than trying to extend their lives.


The position of the former chairman, Gregory B. Jaczko, is not unusual in that various anti-nuclear groups take the same stance. But it is highly unusual for a former head of the nuclear commission to so bluntly criticize an industry whose safety he was previously in charge of ensuring.

Asked why he did not make these points when he was chairman, Dr. Jaczko said in an interview after his remarks, “I didn’t really come to it until recently.”

“I was just thinking about the issues more, and watching as the industry and the regulators and the whole nuclear safety community continues to try to figure out how to address these very, very difficult problems,” which were made more evident by the 2011 Fukushima nuclear accident in Japan, he said. “Continuing to put Band-Aid on Band-Aid is not going to fix the problem.”

Dr. Jaczko made his remarks at the Carnegie International Nuclear Policy Conference in Washington in a session about the Fukushima accident. Dr. Jaczko said that many American reactors that had received permission from the nuclear commission to operate for 20 years beyond their initial 40-year licenses probably would not last that long. He also rejected as unfeasible changes proposed by the commission that would allow reactor owners to apply for a second 20-year extension, meaning that some reactors would run for a total of 80 years...

Email ThisBlogThis!Share to TwitterShare to FacebookShare to Pinterest
Labels: myth of nuclear safety, US