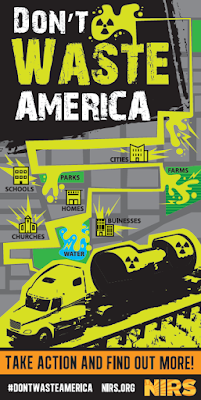 Congress is attempting to push one of the worst nuclear waste bills we have seen in years. The Nuclear Waste Policy Amendments Act of 2017 is a nuclear waste bill that threatens nearly every state with decades of nuclear waste shipments. If the passed, the bill would:
This dangerous bill must be stopped! It would launch thousands of shipments of the deadliest radioactive nuclear waste ever made via truck, train, and/or barge shipments through 45 states, including the hearts of many major cities and farmlands, headed for Yucca Mountain, Nevada and “interim” parking lot dumps.

This is a major fight you can help win--Don't Let Congress Waste America!