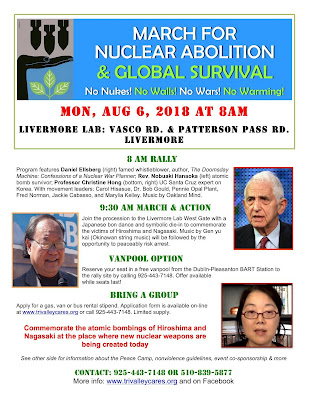 Mark your calendar today for this major Rally, March and Nonviolent Direct Action on Monday, August 6th. Join us to commemorate the U.S. atomic bombings of Hiroshima and Nagasaki, Japan at the site where new nuclear weapons are being developed for use today. 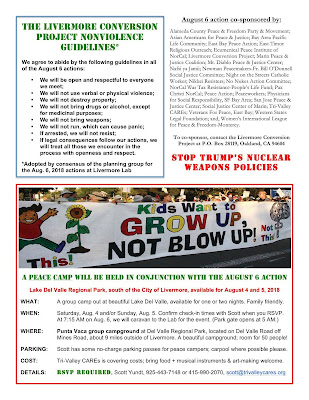 We will gather at Livermore Lab to stop the creation of novel, “more usable” nuclear warheads that the Trump Administration proposed in its Nuclear Posture Review and fiscal 2019 budget, both released earlier this year. We will join millions of peace advocates around the country and the world on this memorable day to say “never again” to the use of nuclear weapons – and to call for their global abolition. Our keynote speaker will be Daniel Ellsberg, perhaps best known as the whistleblower who released “The Pentagon Papers” to hasten an end to the war in Vietnam. He has been an analyst at RAND Corp. and a consultant to the Defense Dept., specializing in problems of command and control of nuclear weapons, war plans and crisis decision-making. Ellsberg recently released his critically acclaimed memoirs, The Doomsday Machine: Confessions of a Nuclear War Planner…