A treaty intended to limit the United States and Russia’s long-range nuclear arsenals officially takes effect today. But the once-promising treaty, signed eight years ago by President Obama, is overshadowed by a new nuclear arms race sparked by President Trump. On Friday, the Trump administration unveiled its new nuclear weapons strategy, which involves spending at least $1.2 trillion to upgrade the United States’ nuclear arsenal, including developing some completely new nuclear weapons. Prominent anti-nuclear advocates have denounced the Pentagon’s plan as “radical” and “extreme.” For more, we speak with Beatrice Fihn, executive director of the Nobel Peace Prize-winning International Campaign to Abolish Nuclear Weapons.

This comes as the Bulletin of the Atomic Scientists advanced the Doomsday Clock 30 seconds closer to midnight. The clock is a symbolic timekeeper that tracks the likelihood of nuclear war and other existential threats. It now stands closer to midnight than at any time since 1953. The scientists directly cited President Trump’s nuclear policies as one of the reasons for advancing the clock.

For more, we go to Geneva, Switzerland, where we’re joined by Beatrice Fihn, the executive director of the International Campaign to Abolish Nuclear Weapons. It is the latest organization to win the Nobel Peace Prize. It won in December.

Beatrice Fihn, well, first of all, congratulations on the Nobel Peace Prize. And talk about what this, what’s called the NPR, the Nuclear Posture Review, the Trump administration’s plans for nuclear weapons, what it means for world peace.

BEATRICE FIHN: It’s a really dangerous new policy. We have already had a very dangerous status quo for many years. And this just increases, really, the risk of nuclear war. It is a policy that lowers the threshold for using nuclear weapons and develops new types of nuclear weapons that would be easier for President Trump to use. It’s dangerous, and it puts us on the path towards nuclear war, if we don’t act now.

JUAN GONZÁLEZ: And, Beatrice Fihn, what are the commitments right now of the United States in terms of lowering or reducing its nuclear arsenal?

BEATRICE FIHN: Well, the United States has signed the Nuclear Nonproliferation Treaty, which commits it to negotiating good-faith nuclear disarmament. But so far, that has not taken place. But it’s not just the United States. All nuclear-armed states, including Russia and China, France, U.K., are modernizing their nuclear arsenals, upgrading instead of reducing their arsenals.

AMY GOODMAN: Let’s go to a clip of President Trump giving his State of the Union last week. He said he would beef up the U.S. nuclear arsenal and dismiss global efforts to ban nuclear weapons… 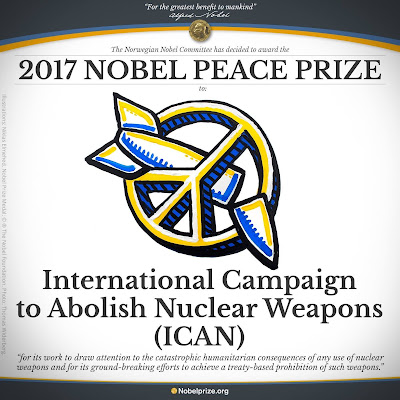