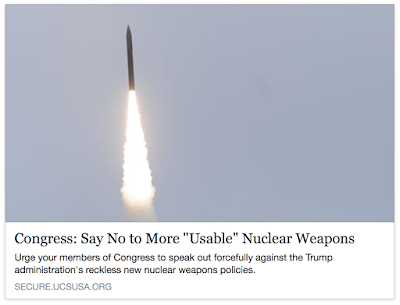 The Trump administration recently released its new "Nuclear Posture Review" outlining radical, dangerous, and costly changes in US nuclear weapons policy that will make nuclear war more likely and the United States—and the entire world—less safe.
This truly is an all-hands-on-deck moment. We need Congress to help stop this potential disaster.
They want to:
• develop two types of new more usable nuclear weapons on top of the seven we already have;
• make it easier to use US nuclear weapons;
• spend some $1.7 trillion over the next 30 years to re-build the entire US nuclear arsenal; and
• continue the absurd policy giving one person—the president—sole, unchecked authority to launch nuclear weapons.

Over the years we've defeated similarly dangerous proposals. With your help, we'll do it again.
Write to your members of Congress today and tell them to just say no to the Trump administration's new nuclear weapons policies. Urge them to speak out publicly and to actively oppose plans and spending for new nuclear weapons.
Nothing is more important than our safety and security. Nuclear weapons don't make us safe and we must do everything we can to prevent nuclear war.