podcast ---- Click here to LISTEN! – Daniel Ellsberg is best known as the whistleblower who released the Pentagon Papers, which exposed what United States government officials really knew and thought about the Vietnam War. But he also worked as a nuclear war planner when he was a RAND Corporation researcher and consultant for the Defense Department.


In a recently published book, “Doomsday Machine: Confessions Of a Nuclear War Planner,” Ellsberg recounts his journey as he discovered how close a nuclear strike by the United States government or a war between the U.S. and Soviet government could bring the Earth’s population to near-extinction.


From the late 1950s to the 1960s, he uncovered several traits of U.S. nuclear war plans that would produce quite devastating results for humanity. He attempted to persuade U.S. officials to address them and achieved rather mixed results.


On the “Unauthorized Disclosure” weekly podcast, Ellsberg highlights how he came to learn the military’s estimate for how many hundreds of millions of people would die if a nuclear attack was launched. He describes how there was no way to call back pilots if an execute order was given. He shares how his father refused to be part of the production of the H-bomb and talks about how he had classified documents on nuclear matters, which he planned to release until they were tragically lost.


ANNOUNCEMENT: Daniel Ellsberg will be a keynote speaker at the August 6, 2018 Hiroshima-Nagasaki action at Livermore Lab 8am. Please spread the word - and visit this page for updates soon. 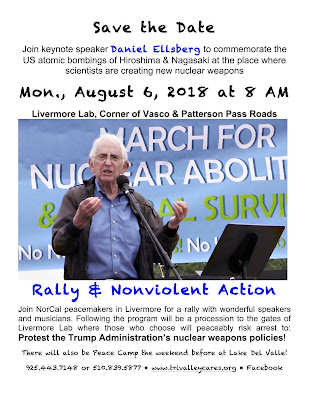