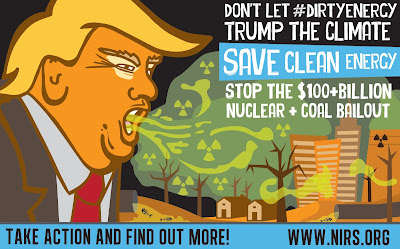 Department of Energy (DOE) Secretary, Rick Perry, has proposed an unprecedented bailout for nuclear and coal power plants that will raise people’s energy bills and undermine renewable energy.
The Federal Energy Regulatory Commission (FERC) is fast-tracking the DOE’s radical proposal and plan to adopt it in 60 days. Public comments were due October 23rd, exactly three weeks after the plan was announced, and we delivered over 11, 420 comments to FERC.
The proposal calls for subsidies for old, outdated, and very polluting nuclear and coal plants under the guise that they promote electric grid reliability.

Here are the basics:

• The DOE wants FERC to bailout power plants that have 90 days of fuel onsite (-- a meaningless idea fabricated to justify subsidies for nuclear and coal).
• FERC would guarantee the profitability of those coal and nuclear plants by charging consumers prices for their electricity that cover each plant’s operating costs, plus a "return on investment."
• The bailout would cover 43 reactors in thirteen states—nearly half of the nuclear industry—and over 60 coal plants.
• The purported basis for the proposal is to ensure the reliability of the electrical grid, but the DOE’s own report published in August found that wind and solar energy strengthened the affordability, reliability, and resilience of the grid.
This bailout will raise electricity costs by billions of dollars a year and ratepayers across the country will ultimately foot the bill for supporting these expensive plants. And worst of all – it will block renewable energy and increase greenhouse gas emissions.
FERC is taking a final round of public comments until November 7. And we need to deliver another 11,000 comments to them! Even if you already signed a petition or sent a comment, please do so again for this final round.
It is still important to voice our opposition and the time to act is NOW! And after that, pass it on to your friends and to your contacts on facebook, twitter, Instagram, etc.

Stay tuned for more actions to take as we build this campaign to save our 100% Clean Energy Future!