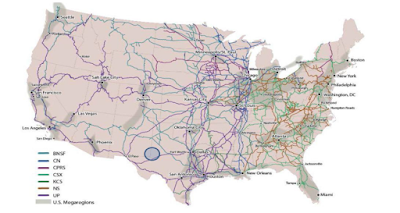 Our Don’t Waste America campaign focuses on preventing decades of massive and dangerous high-level radioactive waste—irradiated fuel from nuclear power reactors—transport across the United States on our rails, roads, and waterways.

Such large-scale transport, which could affect 100 million Americans who live within a mile or two of proposed transport routes, would occur if efforts to revive the proposed scientifically-indefensible Yucca Mountain, Nevada waste dump are accomplished, or if a Centralized or Consolidated “Interim” Storage (CIS) site for high-level radioactive waste is created.

Say NO to the "Nuclear Waste America" Bill!

Contact your US Representatives NOW to Vote NO on a nuclear waste bill being rushed through Congress—one of the most dangerous we have seen. U.S. Rep. John Shimkus (R-IL) bill--H.R. 3053, the Nuclear Waste Policy Amendments Act of 2017 threatens nearly every state with decades of nuclear waste shipments.  The bill passed the House Energy committee two weeks ago, and Congressional leaders are pushing for the House to approve it this month.
Rep. Shimkus' bill would launch thousands of shipments of the deadliest radioactive nuclear waste ever made via truck, train, and/or barge shipments through 45 states, including the hearts of many major cities and farmlands, all headed for Yucca Mountain, Nevada and supposedly “interim” parking lot dumps. These shipments would pass through 370 of the 435 congressional districts across the U.S.
The bill aims to revive the cancelled, unsuitable Yucca Mountain nuclear waste dump that is located on sacred Native American land and is incapable of isolating nuclear waste as it is located on high-risk earthquake fault lines and vital water systems.
The bill would legalize the opening of centralized interim storage sites for radioactive waste now proposed in Texas and New Mexico, ultimately creating de facto permanent parking lot dumps for nuclear waste.
This bill will not just put our nation’s nuclear waste policy on the wrong track--it will step on the gas and tear out the brakes. It ignores environmental concerns, Native American land rights and sovereignty, states’ rights to protect their residents and natural resources, and attempts to truncate public review in order to force failed, illusory solutions on the American people: Yucca Mountain and consolidated "interim" storage–both of which have proven to be unworkable. It does nothing to make storing and managing nuclear waste less dangerous, wherever it is.