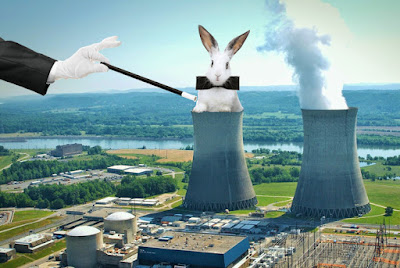 The oxymoronic term “alternative facts” has recently taken root in American political conversation, but the alleged magical thinking by the nuclear power industry is nothing new to informed energy sector critics.
The nuclear power meltdowns at Three Mile Island (TMI) in the US, Chernobyl, now the contaminated legacy of the Ukraine, originally part of the USSR – now Russia, and the triple meltdowns in Japan at the Fukushima Daiichi atomic reactor site show that the various atomic power disaster scenarios created by the nuclear industry are far from what actually occurred during the last 38-years.
Inaptly named “maximum credible accidents” by the atomic power industry, these actual meltdowns are really more of the industry’s alleged magical thinking based on the projected maximum cash available in each country hosting the reactor.  Not surprisingly, nuclear reactors are simply incapable of withstanding the worst disaster imaginable. The proclamations made by nuclear power and nuclear weapon fixated governments have been designed to reduce costs to reactor owners, which are either corporations or governments, and then passing on the radioactive remains to local communities to sort out and protect for the next 25-mellenniums – until all the radioactivity decays away.
Before TMI, the magical thinking in the nuclear power industry assumed that failures would only occur one at a time: according to industry calculations, there was essentially a zero percent likelihood of multiple systems failing at once…